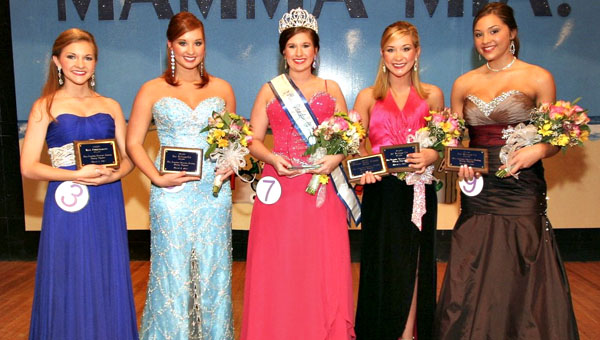 The Miss CCA contestants and Miss CCA 2010, Candice Dunn, opened the show with their rendition of “Mamma Mia” a song made popular by the Swedish pop band ABBA.

The fourteen Miss CCA contestants competed in evening gown, talent, and an eight minute off campus interview with the judges prior to the pageant.

The Little Sisters performed a jazz dance number to “Take a Chance on Me.” The escorts, dressed in black tuxedos, complete with hats and canes, performed a dance to “Does Your Mother Know?”

CCA’s own Mrs. Daun Pittman, kindergarten teacher, shared her vocal talents and the stage with her daughters, HeartLee and PresLee, as they performed to a medley of ABBA’s hits.

Following the evening gown competition, each contestant performed a talent of their choice.

Sophomores participating in the pageant were Sarah Jackson, who performed a pointe dance to “Faeres,” by Mannheim Steamroller, Kaitlyn McGough sang Helen Reddy’s hit, “Delta Dawn,” and Emilee Speed performed a piano number to “Drops of Jupiter” by Train.

Seniors competing were Kayla Bilbrey, who performed a self-choreographed jazz dance to “Fame,” Danielle Culpepper sang “It Matters To Me,” by Faith Hill, Paige Lester clogged to “Boogie Woogie Bugle Boy,” Susannah Sport sang “For Good” from the Broadway musical, “Wicked,” and Camden Stephens played “Requiem for a Dream” on the piano.

Mims, Lindsie Collins Hernig, and The Troy School of Dance entertained the crowd, and both Tori Free and CCA’s own Rachel Tatom, had the crowd tapping their toes to two clogging numbers.

Tralyn Hord was named 2nd Runner Up and talent winner, and Camden Stephens was 3rd Runner Up.

Sarah Jackson was named Miss Congeniality, which is chosen by the contestants themselves.