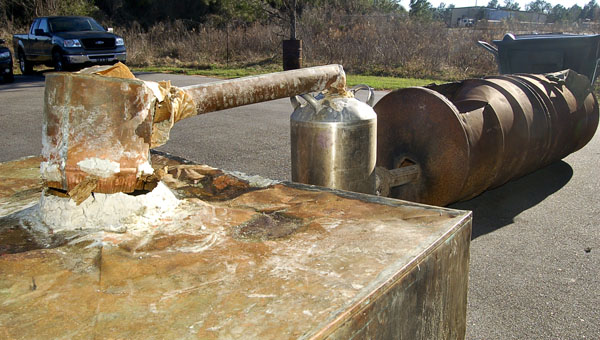 This still was confiscated by ABC agents.

A Helicon man was arrested earlier this week after Alabama Beverage Control agents busted up his moonshine still.

“We had several agents who worked exhaustively on this case and spent extensive hours watching the site,” said Lt. Lance Price of the Alabama Beverage Control Board. “It all came together on Sunday afternoon.”

Agents confiscated a copper still (valued at $900 because of the pureness of the copper) and four 55-gallon mash barrels.

Price estimates that the still was capable of producing seven gallons of moonshine per week per barrel, which could be sold for $700.

With four barrels, the income for such an operation could be over $36,000 and nearly $25,000 profit after expenses.

“That’s a lot of tax dollars not being paid,” Price said. “That’s part of what this agency was created to do. We’re also not taking into account the health risks.”

“The ABC Board is here and working,” Price added. “I want to commend the officers who worked this case.”