Outside contractor to help with new water meters 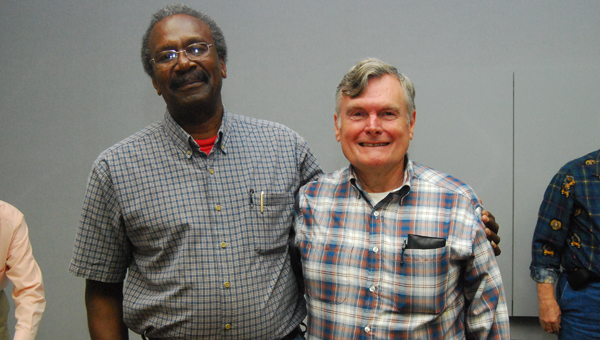 Tommie Hamilton, Sr. and Daniel Driscoll, Jr. were both appointed to new 6-year-terms on the board. (Advocate Photo/Austin Nelson).

The Butler County Water Authority has been making progress on shoring up the practice of multiple users on single meters.

Wesley Bass, with Artesian Utilities, said that Monday, Feb. 28 is the last day for persons that have been identified as multiple-user customers to come forward.

These contracts, Bass said, are for new meters to be installed. A total of 65 meters have been installed so far, Bass said.

After consulting with Bass, the board decided to bring in an outside contractor to help expedite the final meter installations.

“When we took this on, we knew there were a lot of these out there,” Bass said. “It’s started to become an overburden, however.”

Kevin Averitt, out of Camden, will be assisting Artesian in completing the work.

“We just want to go ahead and get this over with,” Bass said.

The board will have to pay some money out of pocket to expedite the process. However, during the discussion it was determined that this move would pay for itself thanks to the new deposits and increased revenue from the new customers.

Joe McCraney and the rest of the board recognized Artesian’s hard work to clear up the multi-user accounts.

During a review of system operations and upcoming projects, it was reported that the board expects to receive a response from their audit within the next few weeks.

Also, Board members Daniel Driscoll, Jr. and Tommie Hamilton, Sr. were appointed to new 6-year-terms on he board.