Chamber honors Johnson as 2011 Citizen of the Year 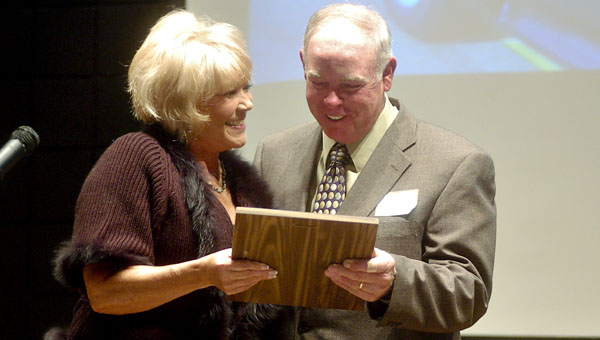 Chamber of Commerce President Martha Dickey presents Citizen of the Year Jimmy Johnson with a plaque.

Residents from all over Crenshaw County gathered on Tuesday night at the Dei Center in Luverne to honor Brantley’s Jimmy Johnson, who was named the Crenshaw County Chamber of Commerce’s Citizen of the Year for 2011.

Following an introduction by Melissa Bush, Johnson took to the podium to say a few words.

“I’m a very blessed man with a wonderful family,” Johnson said. “I know how important family is, and I’ve got a church family, school family, fire department family, rescue family and softball family.”

He graduated from Dozier High School in 1966 and then began his work as a logger.

The Alabama Forestry Association named him Logger of the Year in 1995, and he also served on the A.F.A. Board of Directors.

Johnson wears many different hats in Brantley, including serving as an Assistant Chief with the fire department and a Second Lieutenant for the rescue squad.

He has been a part of the fire department since 1985 and a member of the rescue squad since 2005.

Another of Johnson’s passions is athletics, and he coaches girls’ softball in addition to serving as Brantley Recreation Board Chairman.

Johnson is also an active member of the Quarterback Club, the Diamond Club, Letterman’s Club and others.

During his speech, Johnson also talked about the support his family at home has given him.

“Linda has been my wife for 42 years, and she’s still making a lot of sacrifices,” he said.

Johnson married Linda Lowman, his high school sweetheart, in 1968, and they have two children, Stephen and Candace, four granddaughters and one grandson.

Johnson has also been a lifelong member of Sasser Church of Christ.

Johnson said he’s humbled to have received such an honor in a county full of upstanding people like Crenshaw.

“I’ve lived here all my life, and I’m not sure there’s anywhere else I want to live,” he said. “People here just care about each other.”