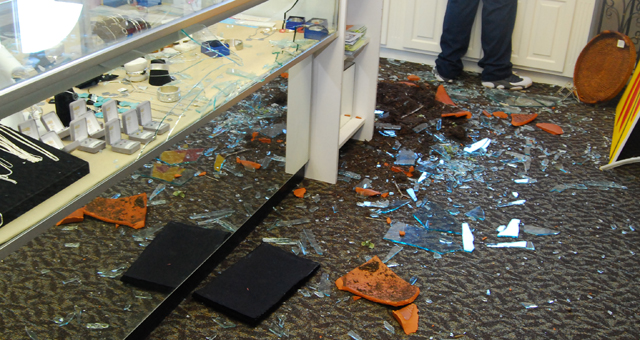 This is the view of one of the front counters at McFerrin's on Wednesday morning. Store owner Susan Foster said they are still going through their inventory to determine what is missing.

The still of Tuesday night was broken suddenly when a flowerpot went crashing through the window of McFerrin’s jewelry, triggering the store’s alarm, according to Lt. Justin Lovvorn.

Lovvorn said that officers responded to the scene to find a flowerpot scattered in pieces on the floor, but the perpetrators had fled the scene.

Owner Susan Foster said once the the burglar or burglars gained entry, they walked along the left counter, breaking two cases and stealing some of their contents.

“We are still working on getting a complete inventory,” Lovvorn said. “Right now, we think it was some average-priced, assorted jewelry and watches. Most of the expensive stuff was not out on display through the night.”

Lovvorn said they are currently following up a few leads.

“It appears to be someone without a lot of experience that has just been walking in that area at night looking for opportunities,” Lovvorn said.

The Greenville Police Department would like anyone with information about any unsolved burglary cases, to come forward, including but not limited to the recent H and R Block and McFerrin’s incidents. A reward will be offered for information leading to a successful conviction, Lovvorn said, and informants may remain anonymous.

To submit a news tip, call GPD at 382-7462 and ask to speak with investigator Kenneth Hadley or Justin Lovvorn.