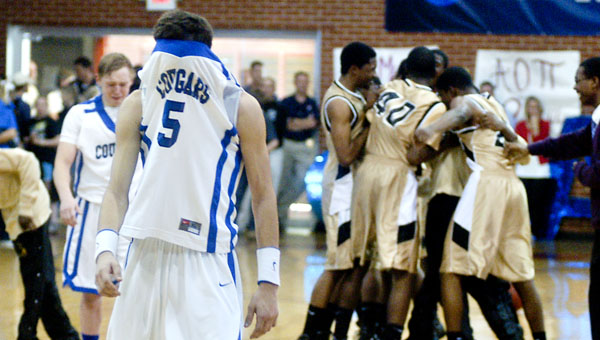 Austin Brown and Nick Peeters walk off the court as Ellwood Christian celebrates.

A cold day shooting from the floor spelled disaster for the Crenshaw Christian Academy boys as they fell to Ellwood 37-25 in the state championship game.

Both teams started out playing hard and fast, but both quickly cooled off and Crenshaw held a 13-8 lead at halftime.

During that first half, point guard Nick Peeters came up limping, and that injury plagued the Cougars for the entire game.

“Nick is our primary distributor,” said head coach Michael Malpass. “He can score, and he also gets others involved.”

Despite that, Malpass said that Ellwood was just the better team.

“They played harder than we did,” he said.

Ellwood came to life in the third quarter and put 11 points on the board in that period.

The Eagles’ lead in the fourth quarter stretched to 26-19, but two quick buckets by Austin Brown brought CCA to within three, where it stayed until there was a minute left in the game.

Ellwood managed to force a turnover and hit free throws down the stretch to seal the win.

“They got to the foul line 34 times, and we only went 4-15,” Malpass said. “That shows that they played more aggressively than we did.”

“We’ve had games like this where we would get into a scoring funk, and I think high school players need offense to keep playing good defense,” he added. “When the ball doesn’t go in, it doesn’t go in.”

Brown was the top scorer for the Cougars with 14 points.

The Cougars end the season with a 20-8 record.