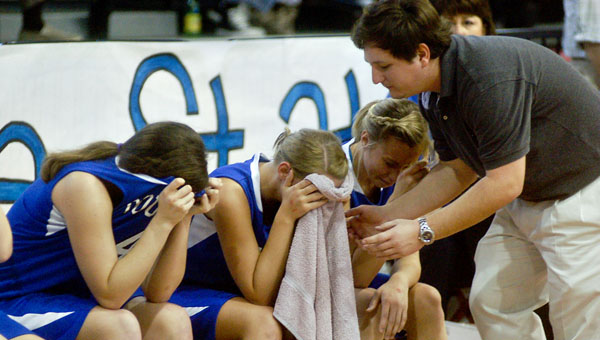 Despite a fervent, last-minute comeback, the Crenshaw Christian girls fell to the Coosa Valley Rebels 50-44 in the state championship game.

The Rebels had trouble converting several free throws, but the Cougars made the mistake of fouling close to the basket and the Rebels made an old-fashioned three-point play to put the game out of reach.

“We fought hard all year, and I knew the team had a comeback in them, but we just ran out of gas at the end,” said head coach Tyler Hill.

Although the Cougars scored first in the game, CCA didn’t score again until there was a minute left in the first quarter and they were behind 12-2.

“We’ve gotten off to slow starts before, and it just takes us time to wake up,” Hill said.

Coosa’s lead stayed steady throughout the third quarter until the Rebels jumped ahead in the fourth quarter and set up the Cougars’ comeback.

Quila Robinson was the top scorer for CCA, accounting for 32 of the team’s points.

Despite coming up just short, Hill said the future is bright for the Cougars.

“We’re only losing a few seniors, and we should have all of our starters back next year,” he said.