Two arrested for alcohol sale without a license 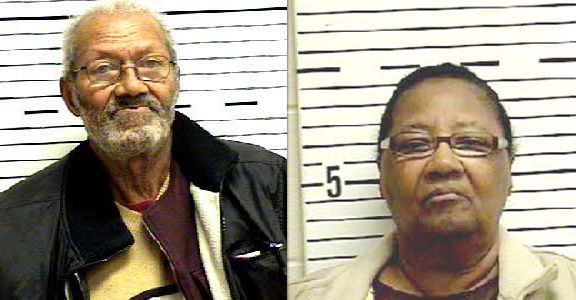 On left, James Roseavelt Cooke, 75, and Mattie Johnson Cooke, 65, were arrested for alcohol sale without a license and possession of alcohol with intent to sell without a license. (Courtesy of Butler County Sheriff's Department)

Two individuals from South Butler County are in custody for allegedly selling alcohol without a permit, according to Sheriff Kenny Harden.

“We had received several complaints from down there about these two individuals,” Harden said.Harden said that they were able to execute an undercover purchase by working with the Alabama Beverage Commission and Georgiana Police Department.
Following successful undercover purchases from two different locations, Mattie Johnson Clark, 65, and James Roseavelt Cooke, 75, were arrested and charged with selling alcohol without a license and possession of alcohol with intent to sell without a license.
Harden said that a good amount of both liquor and beer were confiscated from the two operations when they executed a search warrant. One was allegedly selling alcohol out of the house, while the other had a club of sorts set up in the yard, Harden said. They were on opposite sides of town, and were not collaborating, Harden said.
Harden said they had not received any reports of either individual selling to underage buyers.