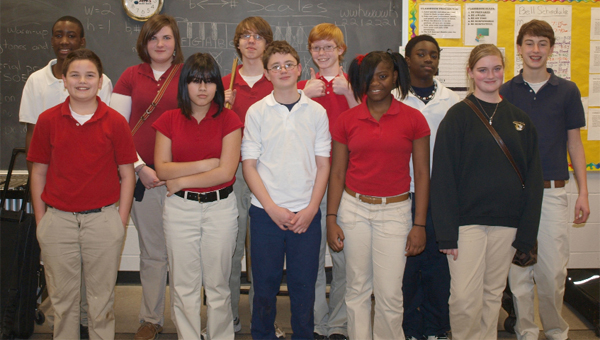 Devin has been playing the trombone for three years in the band, while Mary Margaret has performed on the alto sax for three years and Steiner as a percussionist for four years.

“This is our first time to make All-State and that’s pretty exciting,” said Devin.

He and Mary Margaret were chosen for All-District last year (Steiner did not participate in last year’s competition).

Mary Margaret said her favorite piece of music to play is one she is currently working on, “Handel’s Sonata #6.”

As for Steiner, “well—I like it all!” He said with a grin.

All three of the GMS students plan to go on and play in the high school marching band at GHS.

“I am very proud of these students. We had a strong showing at District and to have students going to All-State for the first time in nine or ten years—that’s really an accomplishment,” said Chris Pryor, GMS band director.

The three students will be going to the State Competition in Mobile April 14-16.

Those students who made All-District—the best of the best in the 13 counties of District VIII—will go on to District Honor Band Competition February 25-26 in Eufaula.