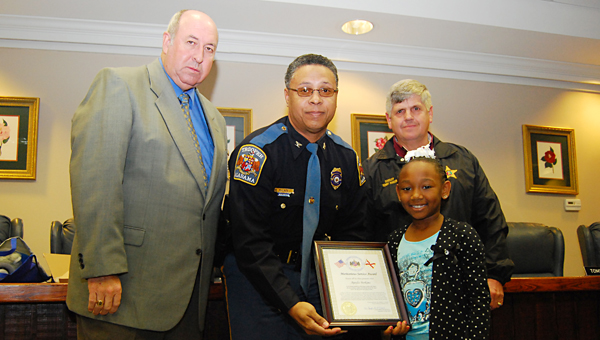 Law enforcement and the city of Greenville gathered in the city council chambers to recognize the heroic actions of Ajayla Perkins, 8. Pictured from left to right, Lonzo Ingram, Police Chief; Col. Hugh McCall, Director of Public Safety, Ajayla Perkins, and Sheriff Kenny Harden. Last year, Perkins called law enforcement to report that her Great Aunt had been shot. Perkins relayed critical information such as a description of the shooter, which helped law enforcement respond. The shooting left Mildred Heard, 61, alive, but with a gunshot wound to her face and claimed the life of Marion George, 57, as the well as the shooter, Jim Heard, 60. Perkins received a certificate honoring her actions, as well as bag full of goodies from the law enforcement community which included a teddy bear and ruler among other items. Perkins is the daughter of Kimberly Perkins. (Austin Nelson, The Advocate)