Planting seeds of art in the Black Belt 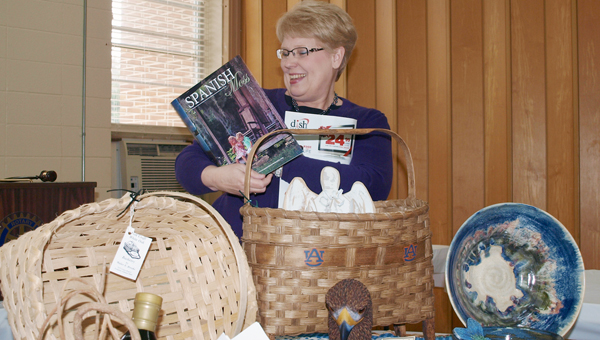 Black Belt Treasures Director Sulynn Creswell with some of the items created by regional artists.

In a world of impersonal mass production, the appeal of hand-made goods is a strong one. A piece of  kiln-fired ceramics shaped by skilled hands on a spinning potter’s wheel, or a basket woven from pine needles collected from the area’s abundant forests; a whimsical original painting or piece of fine art photography by a local talent that showcases the faces and places fading from our daily view: these are things to cherish. A place in Wilcox County allows visitors to the region to discover the work of such artists and artisans, while providing these creative people with extra income.

Black Belt Treasures, which opened in September 2005 in Camden, started out with 75 participants.

Today, director Sulynn Creswell says more than 350 individuals from across the 19-county region designated as the Black Belt Heritage Area have their locally-made foodstuffs, art, crafts and books for sale through the gallery, including a number of Butler County citizens. The gallery, which is located on Highway 41 South in the former McGraw-Webb Chevrolet building, has become a big draw to the area with visitors from 49 of the 50 states and more than 20 foreign countries, Creswell, who spoke to members of the Greenville Rotary Club, said.

“We often deal with negative press because of the issues we deal with here. The Alabama-Tombigbee Regional Commission (ATRC) was seeking a way to help people in and outside of the region to focus on the positives,” Creswell explained.

“We felt there were things that were tourist-worthy here and we simply needed to get out and identify the places, people and stories that would intrigue people enough to come into this region. We found out we had a lot of talented people here.”

The decision was made to create a place where the arts and culture of the region could receive lots of attention. But why was Camden chosen?

“It’s definitely off the beaten path, and deliberately so. We wanted to bring people into the region and from there, see them travel to other spots within the region,” Creswell said.

Artists,’ authors’ and artisans’ work is taken on consignment at Black Belt Treasures. They receive 70 percent of the proceeds from the sale of their work, with 30 percent going back to cover running the gallery. Prices for items range from $10 to several hundred dollars, and there is something for everyone, the director says.

Creswell said a definite stimulation of the local economy had taken place due to the gallery, along with the added benefits of providing arts education programs to the community.

“We offer art classes for children and ongoing classes for adults, including chair caning and now we are about to offer textile weaving,” Creswell said.

The most popular overall category at the gallery is pottery, Creswell says, with the number-one selling item being the music box churches created by a Macon County artist.

“We really have a huge variety of items and we are continuing to grow in every way,” Creswell said. “In five years, we have sold over a half-million dollars in work from regional artists and we want to see that keep growing.”

After a couple of sluggish years with the slow down in the economy, Creswell said the final quarter of 2010 was much improved, with a 26 percent increase over the previous year’s sales.

“The gallery is a great way to get the word out about our region by bringing people to the area and it’s promoting our artists,” Creswell said.

A preview gallery opened in Butler County six months ago with a display set up inside the Greenville Area Chamber of Commerce Depot.

“It is doing very well for us, and it’s all due to (Chamber director) Francine Wasden’s determination that we are there now,” said Creswell.

To learn more about Black Belt Treasures, visit their website at www.blackbelttreasures.com.