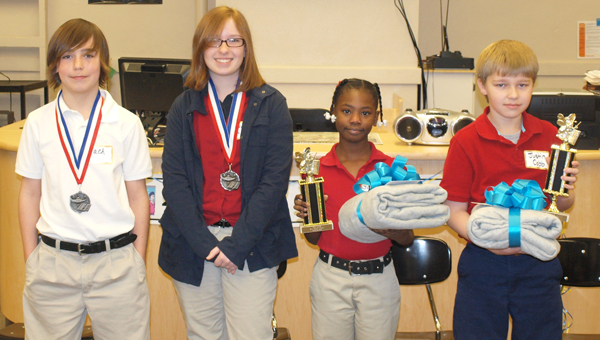 The county’s top spellers gathered in McKenzie on a rainy Friday morning to see who was the best of the best.

McKenzie School hosted the 2011 Butler County School System Spelling Bee, with the winners from Greenville Elementary, Greenville Middle School, Georgiana School and McKenzie School competing for the chance to go on to the state spelling bee.

Minie Coon served as the pronouncer for the event with Gloria Hartley providing audio/dictionary services.

Justin Cobb of Georgiana School took home the trophy as Top Speller with the winning word “alcove,” with Jalia Pennington of GES as the runner-up. Also competing and receiving medals of participation were Adair Garrett of GMS and Zackary Kendrick of MHS.

Following the spelling bee, all those in attendance were invited school counselor Carol Williams to enjoy refreshments, including Steamboat Sandwiches and finger foods.