A charming Broadway musical perfect for the entire family is making its way to the Camellia City Monday, February 7.

An affectionate homage to America in days gone by, “The Music Man” is set to strike up the band at 7 p.m. at the Ritz Theatre, the final production in the Greenville Area Arts Council’s 2010-2011 season.

“The Music Man” tells the story of a charismatic traveling salesman who arrives in small town Mid-America in 1912 promising to battle “sin and corruption” in the pool halls with music-a big brass band complete with shiny instruments and fancy uniforms for the youth of River City, Iowa.

Actually, “Professor” Harold Hill is a consummate con man who can’t play a lick of music and who has no intention of bringing such a band to River City. But his plans to skip town with the cash are put aside when he falls for the town librarian, Marian.  Marian proves initially resistant to Hill’s charms, but romance eventually wins out-along with the growing suspicion of the good people of River City that Hill is not all he claims to be.

Filled with memorable tunes such as “Trouble in River City,” “Seventy-Six Trombones” and harmonious barbershop quartet numbers such as “Lida Rose” and “Goodnight Ladies,” “The Music Man” promises to provide an enjoyable evening for all ages, says GAAC director Nancy Idland.

“A group of our Ritz Players actually performed ‘Lida Rose’ at one of our musical fundraisers, so it will be such fun to see it on stage as part of this great American musical,” said Idland.

Tickets for the GAAC production are available at The Pineapple and at the door and are $20 for adults and $15 for students. 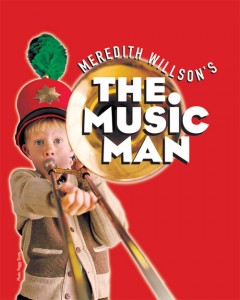 "The Music Man" is the final production of the GAAC season. Tickets are $20 for adults and $15 for students.