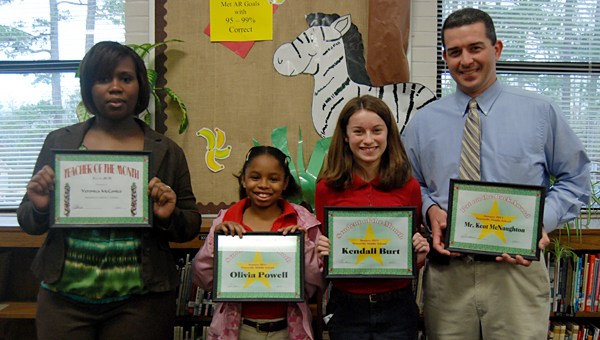 The faculty and staff of Greenville Middle recently took time to honor those among their ranks.

Principal Curtis Black said that on January 21, the school recognized January’s Teacher of the Month Veronica McConico, with the Pat on the Back Award going to Assistant Principal Kent McNaughton. Students of the Month were also named, with Kendall Burt being this month’s seventh and eighth grade student and Olivia Powell claiming the honor for fifth and sixth grades.

Margaret West was recognized for her work as assistant principal, Black said, and also, members of GMS’s support staff and maintenance department Stephen Hester, Earnest Thompson and Don Reynolds were commended for their hard work.

“The main thing we were trying to do was try to highlight some of the good things going on here at GMS and the wonderful people that come in and do their best to serve our students day in and day out.”

Teacher of the Month Veronica McConico has only been at GMS one year, but is already making her mark on the school.

“She is a dynamic reading teacher with great classroom management,” Black said. “The students come in and know what to do. She has a bright future ahead of her.”

McConico worked as a banker before deciding to go to Troy  University to become a teacher.

“I always wanted to teach, and it was just the right time for a change,” McConico said.

Pat on the Back recipient and assistant principal McNaughton, however, has spent the past 17 years working at Greenville Middle School. McNaughton previously served as a fifth grade teacher and guidance counselor.

Having done it all, McNaughton is still nostalgic about his days in the classroom.

“There are days that I’d really love to be back teaching again, but I really love all aspects of teaching, including administration,” McNaughton said. “In 17 years, I have never dreaded going to work.

“It’s great to work this long at the same place without feeling like you don’t want to come in to work each morning.”

Black thanked Wal-Mart, Super Foods and Piggly Wiggly for their contributions of food and supplies to help the school continue to honor its faculty members. 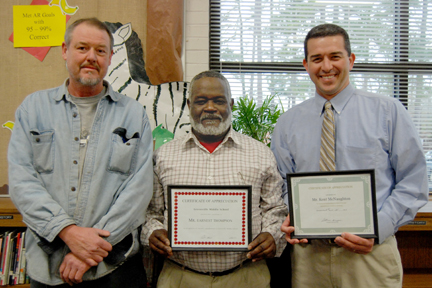