In 1951, the Korean War was being waged across the seas; CBS introduced the first color television programming and a mere $1, 800 would cover four years of college.

Some 60 years later, Gene Hardin, retired newspaper editor, former state representative and active community leader, is still roaring for the club, which supports many sight saving-related programs along with hosting the annual Memorial Day Celebration in the Park.

Hardin was surprised on Monday when his fellow club members devoted their meeting time at Beeland Park to celebrating and honoring him for reaching this milestone.

“He has been and continues to be a mentor to new members as well as old ones,” said long-time Lion Hubert Little, club treasurer.

“Lion Hardin understands our motto: ‘We serve.’ Some of us may not fully understand the meaning of it, but he knows because he has sacrificed time, effort and material things to serve the club and community, and excelled in everything from fundraising to regular attendance.”

Lion Frank Hickman, who has been a member of the Greenville club since 1979, said many strong members were responsible for the longevity of the club.

“However, none of them stands taller than Gene Hardin . . . I have watched 31 years of his participation and he is always present, willing and more than able,” Hickman said.

“He’s been involved in selling everything from brooms to light bulbs to giant coloring books, and helping organize the Lions Christmas Dance, which was the social event of the season in its day, the Ladies Cook-Out and helped establish the OG Holley Scholarship. Lions was fun-and Lion Gene was in the middle of it.”

Hickman described Hardin as “a wonderful family man, faithful member of his church and a good friend to me.”

Visibly moved by his club’s salute, Hardin, who has given a standing ovation by the Lions and their guests, said the Lions Club had been “a fantastic part of my life.”

“The thrill and privilege of serving in a club of this magnitude and dedication isn’t something everyone gets to treasure,” Hardin said.

“This club has served as a sort of Chamber of Commerce, a guiding light for newcomers to our town.”

Holding up his plaque and 60-year chevron pin, Hardin said he was sorry his family could not be there for the occasion.

“They won’t believe this when I get home. What you have done for me here today is just wonderful.” 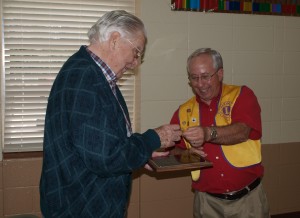 Updates on new volunteers, activities and sponsorships–and a birthday celebration–were all part of the American Cancer Society’s Relay For Life... read more