Updates on new volunteers, activities and sponsorships–and a birthday celebration–were all part of the American Cancer Society’s Relay For Life Board meeting Wednesday at L.V. Stabler Memorial Hospital.

With more than 25 teams currently lined up for the May 9 event, Relay chair Galahad Smith said Butler County is already “ahead of the game” in the continued fight against cancer.

“We’ve also had Lisa Lowe and Byron Ward of Georgiana join us on the committee and look forward to them working with us,” said Smith.

The group discussed ways to keep the community event, which is the ACS’s signature fundraiser, lively and enjoyable for all ages.

Smith suggested the addition of a cake walk to the event; other ideas included “Minute to Win It” style competitions and each team creating a themed gift basket (gardening, movies, Alabama/Auburn, spa, et al.) which would be included in a silent auction, with the monies raised going to the teams providing the baskets.

Old favorites such as the Chicken Chase, “Miss” Relay Womanless Beauty Pageant, Relay Idol and more will return in 2011.

An entertaining Relay fundraising event from the past is returning in February, with a nine-person mixed ensemble performing Singing Valentines between 9 a.m. and 4 p.m. February 14.

For a minimum donation of $15 to the ACS, Gerri Castleberry and Crew will come and serenade your loved one. “It is so much fun and we really do put on a show,” said Castleberry.

“Dave and Kyle will be plugging this on their morning radio show on Q-94 and they will also give away two singing Valentines on the air the week of the event.”

Some important dates leading up to Relay For Life are as follows:

*Board Meeting at noon, Feb. 23 at the Hospital Board Room 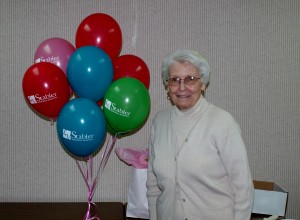 Mary Stallworth is celebrating her 80th birthday this month. The hospital and American Cancer Society volunteer is also helping others celebrate more birthdays as she assists with the ACS's signature fundraiser, Relay For Life.