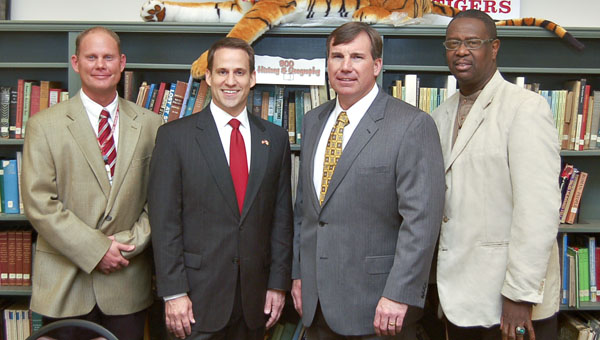 State Senator Bryan Taylor visited Crenshaw County on Tuesday, beginning with a tour of local schools and ending with a speech to the Kiwanis Club.

Taylor started the morning with a visit to Highland Home School, and Luverne School followed shortly before lunch.

The Kiwanis Club’s meeting was filled with visitors as Taylor addressed the crowd.

One of the first things Taylor said was that he is working with former senator Wendell Mitchell regarding issues in the district.

“I asked him to sit down and have lunch with me because I wanted to know what was important to him,” Taylor said. “What were his ‘open loops’, that if he had been re-elected what it was he wanted to accomplish. We’re going to continue to have that conversation and that dialogue.”

“I look forward to continuing to work with him,” he added. “I will do whatever I can to stick up for this district.”

Taylor said he decided to run for the Senate after seeing the “stranglehold” of special interest control.

“I felt like I was called to come in and be part of the sort of upheaval in Montgomery and change the way we do things,” he said.

“We’ve got a big learning curve,” he said, citing the fact that there are 11 new Republican senators.

Taylor said he has also sponsored ethics code bills that cuts down on lobbyist spending on legislators.

Besides the ethics code reforms, Alabama is also facing job and budget concerns, especially in the education budget.

“I wish I could tell you what to expect, but I don’t know,” Taylor said. “We’ve got to be prepared for the worst.”

Taylor also said that he didn’t expect tax increases, but that the state needed a more consistent way to budget.

After fielding questions, Taylor encouraged residents to contact him if they had any questions or concerns.

“I look forward to representing Crenshaw County in the state legislature,” he said.