Senator: deficit needs to be addressed 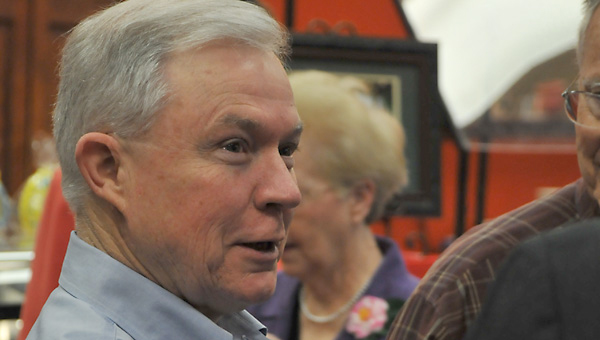 By JAKE BLOCKER
The Troy Messenger

“Massive federal spending has placed our nation on an unsustainable path,” Sessions said. “And, yet the president pledged to continue down this perilous road for at least five more years.”

Sessions said America needs prosperity, not austerity, and that he hoped to see a plan for significant change in the president’s speech.

“Instead of deficit reduction, President Obama has put forward a plan for deficit preservation,” Sessions said. “Last year, he offered the same ‘freeze’ that would maintain increased spending levels and produce an estimated $10 trillion in deficits by the end of the decade.”

In an article taken from The Washington Post, Sessions articulated his feelings about President Obama’s plan for “deficit preservation.”

“Last month, President Obama would agree to maintain current tax rates only if Congress would agree to increase federal deficit spending,” Sessions said. “We are headed toward a cliff, yet the president hits the accelerator.”

President Obama’s foundational mantra of his campaign was “Change You Can Believe In,” but Sessions contends that the President’s administration is conducting “business as usual,” instead of bringing about real change.

“We need leadership and vision from the president, but we saw timidity and denial. He did not rise to the moment, or to the challenges we face. It was far short of what the situation demands. Meaningfully reducing the size of our government and our deficit may not be easy, but it is the only responsible course and the only one that leads to lasting prosperity and opportunity,” Sessions said.

Congresswoman Martha Roby, R-Ala., commented before the president’s speech, voicing some of the same concerns Sen. Sessions now has about some of the proposals the president mentioned in his address.

“Our nation is in the midst of a severe budget crisis. Unfortunately, rather than propose difficult but necessary spending cuts, the Obama Administration is reportedly now considering significant new increases in spending. If true, this effort to boost federal spending even higher represents a monumental misreading of the American people who sent a clear message that they want less government, less spending, and less debt,” Roby said.

Aside from picking apart different areas of the President’s address, Alabama’s GOP senators ( Sessions and Richard Shelby) sat next to their Democratic colleagues.

Sessions said he felt that seat swapping improved the overall mood of the evening.

Shelby and Johnson are on the banking committee together and Sessions and Klobuchar are on judiciary.

In his address, Obama said, “The final critical step in ‘winning the future’ is to make sure that we aren’t buried under a mountain of debt. We are living with a legacy of deficit spending that began almost a decade ago and in the wake of the financial crisis, some of that was necessary to keep credit flowing, to save jobs and put money in people’s pockets. But, now that the worst of the recession is over, we have to confront the fact that our government spends more than it takes in … Everyday families sacrifice to live within their means. They deserve a government that does the same.”

However eloquently spoken, for Sessions, “the proof is in the pudding.”

“Show us some restraint in spending, and we may then agree to raise the debt ceiling,” Sessions said.