Living the Legacy of Dr. King 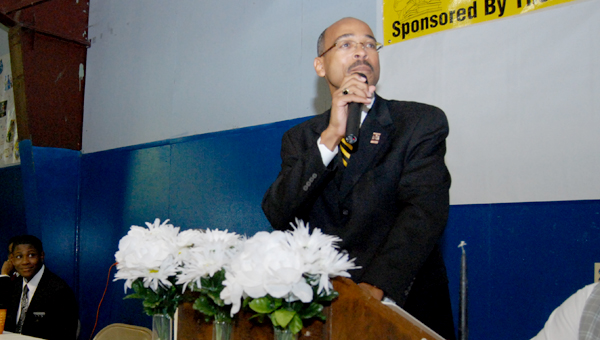 Superintendent Darren Douthitt spoke to a packed crowd at Monday's MLK Freedom Breakfast. Douthitt highlighted King's best attributes during his speech, such as the civil rights leader's commitment to non-violence, service and eduation.

The event has been held for the past 10 years or so, said George Cook, chairman of the Butler County Civic League.

“When we started this breakfast tradition, we fed around 150 people,” Cook says. “But today, I think we fed around 575. It has just grown and grown.”

The theme of this year’s Freedom Breakfast was “Living the Legacy of the Dreamer.” The speaker for the event was Dr. Darren Douthitt, superintendent of the Butler County School System.

Douthitt began with a light-hearted confession.

“I am going to tell you something I have never told anyone,” Douthitt said. “None of the males that I grew up around had a mustache. Look at Dr. King’s mustache and look at mine. I decided at a young age that one day I was going to grow up and have a mustache like Dr. King.”

Douthitt quickly move into the central point of his speech.

“I want each of you to think about whether you are living the legacy of the Dr. King,” Douthitt said.

The superintendent then listed three traits that Dr. King stood for.

“It was Dr. King that taught us that peace and non-violence can be one of the greatest tools to fight injustice,” Douthitt said. “I doubt that all the famous marches of the past, such as the march over the Edmund Pettus bridge in Selma, would have had the same effect if the protestors would have been violent and marched on the police.”

Douhtitt then used a quote from Dr. King to illustrate his second point.

“It was King that said ‘Everybody can be great, cause everyone can serve,’” Douthitt said.

As Douthitt pointed out, King’s desire to serve was evident in all his actions, from his time as a pastor, until the day he died coming to speak in behalf of sanitation workers.

“Dr. King didn’t want much,” Douthitt said. “All he wanted was that all people be treated with dignity and respect, that these people are judged not on the color of their skin, but the quality of their character.”

“Dr. King received his doctorate at age 26 and was committed to education in a way we all should be,” Douthitt said. “These days, high school dropout numbers are too high and college enrollment is too low. We need young people of today to make a way for themselves in education.”

He ended with a simple request.

“Plenty of people have died to give us access to ballots, yet I know people that still don’t vote,” Douthitt said. “I don’t want to know if you are living the legacy of King, but I hope that if you aren’t, you will take this time to reaffirm your commitment to the legacy.”

In a final show of unity, the entire crowd joined hands and sang “We Shall Overcome.”