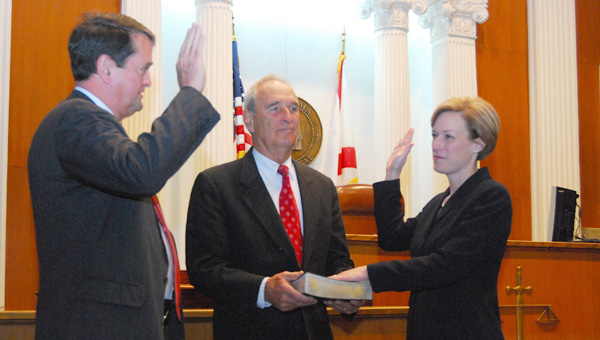 Former Circuit Judge Ed McFerrin swears in newly appointed Circuit Judge Terri Bozeman-Lovell during a ceremony held on Friday. Holding the Bible is Bozeman-Lovell’s father Ted Bozeman, who also served as District Judge of Lowndes County as did his daughter prior to her appointment to preside over the 2nd Judicial Circuit in Alabama. (Advocate Staff, Austin Nelson)

In her first few days on the job, Terri Bozeman-Lovell more or less hit the ground running.

Lovell, who was officially sworn in last Friday as the new circuit judge for the Second Judicial Circuit, had already been hard at work getting familiarized with her new position, spending a day in each of the counties—Lowndes, Butler and Crenshaw—she will be presiding over.

The Hayneville native, who spent 13 years on the bench as Lowndes County’s district judge, says she practically grew up in the courtroom.

“All I’ve ever known is the court system. My dad, Ted Bozeman, was a former district judge for Lowndes County. My two older brothers are both attorneys,” Lovell said.

“I even grew up a short distance from the courthouse, and now I live on the other side of it. It’s always been a part of my life.”

A graduate of Lowndes Academy, AUM and Jones School of Law, Lovell said clerking duties in the court system during her law school days proved a wonderful learning experience.

“My thirteen years as a district judge have been a joy, a challenge and an experience I have learned a lot from,” Lovell said.

She says she has seen a lot of changes since stepping into a district judge’s shoes.

“Three deteriorating old jails have been replaced with new ones; our courthouses have much better security. Civil cases have dwindled and criminal cases have grown,” Lovell said.

“I’ve learned there is a correlation between the economy and the court system. When the economy is bad, you see more thefts, divorces, collection suits. When it’s good, there is more civil litigation.”

Along the way, Lovell, who was one of the youngest jurists to take the bench at the time of her appointment to the district judgeship, says she received good advice and instruction from her mentor and predecessor, Circuit Judge Ed McFerrin.

“He had so much faith in me from the start. The second week I was on the bench he asked me to preside over a jury trial. I was really nervous, but he told me, ‘The only way you can learn how to do it is to learn by your mistakes.’ And he was right,” Lovell said. “I have big shoes to fill, following in his footsteps.”

The young judge went on to preside over Drug Court for the circuit, another great learning experience, she said.

As the new circuit judge for the Second Judicial Circuit, Lovell said accessibility will be a key component in her courtroom.

“I hope to start programs in all counties to help provide our citizens with greater access to justice. We have individuals who need to remain in our prison system; we have others who need to be, and should be, rehabilitated,” Lovell said.

“I also want to be easily accessible. If you have questions about programs or the court system, please contact me. I expect you to do so.”

Lovell, who is married and the mother of a five-year-old son and two-year-old daughter, said she has no immediate plans to move to the Greenville area.

“I do realize all my predecessors have been Greenville natives. I will be here at least three days a week working, so you will see a lot of me. If I can make it through the elections in 2012, I will strongly consider relocating to Greenville,” she said.