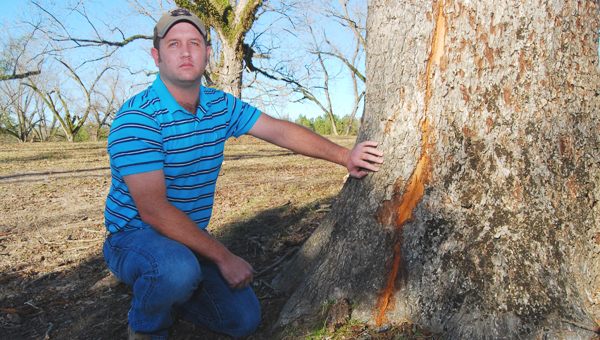 Chris Jordan kneels next to the tree that David Hart was passing when he was stuck by lightning early New Year's morning. Jordan resuscitated Hart at the scene, and Hart left the hospital with no significant injuries. Jordan points a out the crack that was left on the tree that extends from a top branch that the lightning struck all the way to the ground. (Advocate Photo/Austin Nelson)

David Hart, 43, had been bow hunting for deer on New Year’s morning. But around 9 a.m., as a storm started to roll in, he began the slow trek back to the home of Lori Woodard, where he was staying.

Hart was 100 feet from the home when it happened. Woodard and her boyfriend Chris Jordan said they were inside sitting on the couch when they heard a loud crack. A particularly bright flash of lightning outside the window, Woodard said, caught their attention, and they noticed that a pecan tree behind the house was on fire.

From there, Woodard said, time was all a blur. A minute before, Hart’s 13-year-old son Chase had seen his dad walking up to the house. Jordan jumped off the couch, asking if David had made it back. But as Jordan and Woodard ran outside, the image of Hart lying on his back next to the tree came slowly into focus. Jordan told Woodard to go call 911.

“When I came out, he was laying on his back, looking straight up at the sky with eyes open,” Jordan said. “The rain was dropping in his eyes and he wasn’t blinking or moving them at all.”

It was a situation in which many would panic, but Jordan almost instinctively began to try to resuscitate Hart.

“I remember leaning over him to keep the rain out of his face, but when I went to his other side to check his pulse, I couldn’t hear him breathing,” Jordan said. “His eyes were wide open, and he was just making a gurgling sound.”

Jordan doesn’t know how long he gave CPR before Hart came to. All he remembers is telling him that he couldn’t die because he had a kid inside.

“I didn’t know what had happened until Chris told me,” Hart said. “When I came to, all I knew was that everything from my waist down was in excruciating pain.”

When the paramedics arrived, Hart was moving around and moaning, still complaining about his legs. He was taken immediately to L.V. Stabler Hospital.

Hart gave us permission to speak with Dr. Kanu Patel, one of the doctors who treated him when he arrived.

“My feeling is that this man’s steel toe boots saved his life,” said Patel. “Though I wasn’t there and can’t be sure, I think the lighting passed through his bow and body and his steel-toed boots grounded the electricity, allowing it to escape.”

Patel said that when a person is struck by lightning or electrocuted, the jolt  can affect everything from head to toe, with cardiac arrest being the most common cause of death. Less damage is done, Patel said, when the electricity passes through and is not trapped inside the body.

“I think this man is very lucky to walk out of the hospital after something like this with no significant injury,” Patel said. “It is like his guardian angel was watching.”

Hart, who is an electrical technician by trade, knows the power and dangers of electricity. Hart is also aware of just how close he came to never hunting again.

“It is a miracle, I will be completely honest with you,” Hart said. “If it wasn’t for Chris doing what he did, when he did, I wouldn’t be here today.”

Hart is back in his home of Pace, Fla. recovering. He hopes to return to work soon.

And life at the Woodard house is slowly settling back down. But Lori says that in the wake of the accident, she can’t stop thinking about the turn of events that led them to go outside to check on Hart. Woodard had an entire house full of children from a New Year’s Eve party she hosted. A minute or so before the strike, she had sent the children into the kitchen to finish their sodas when Chase noticed his dad walking past the lake.

“Had Chase, (Hart’s son) not seen his dad coming over our dam when they were in the kitchen, we wouldn’t have even known to look for Hart.”