MONTGOMERY – With an approaching winter storm bearing down on Alabama, Governor Bob Riley on Sunday declared a state of emergency.

“We face a serious storm that will have an impact all across Alabama.  With the accumulations of ice that are projected to begin tonight, motorists should stay off roads during these conditions.  State agencies have been preparing for this dangerous weather and have already called up extra manpower and equipment.  However, the most important thing right now is for citizens to be constantly aware of the hazards and to make sure they themselves are prepared.  I urge all Alabamians to heed the weather reports and to make sure their families and friends do the same,” said Governor Riley.

Governor Riley said the Alabama Department of Transportation (ALDOT) has personnel ready throughout the state.  Roadway sanding and salting equipment, dump trucks and spreaders are prepared to move.  ALDOT crews will continue efforts to keep roadways passable as long as conditions allow.  However, based on current forecasts, travelers should expect that many roads statewide will become impassable at some point.

The Alabama Department of Public Safety (DPS) has its officers working 12-hour shifts to assist motorists who insist on traveling, despite the expected dangerous road conditions.

ALDOT and DPS are continually monitoring road and bridge conditions and are prepared to close them if it becomes necessary.  Any emergency road closures will be posted online at the ALDOT website:  www.dot.state.al.us/.

The Alabama Emergency Management Agency (AEMA) has activated the state’s Emergency Operations Center.  Staff and regional coordinators are on alert status and they are prepared to assist local communities with requests for assistance.  The National Weather Service is providing AEMA with constant updates on conditions and how the weather is expected to impact Alabama counties.  Winter weather awareness information can be found at the AEMA website:  www.ema.alabama.gov/.  Updates from the Alabama EMA can also be followed on Twitter through @AlabamaEMA.

The Alabama National Guard also has 7,000 of its troops on drill duty in the state at this time, and they are focusing on storm preparations as well. 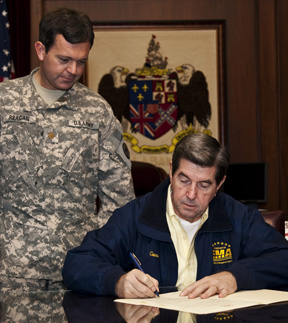 Gov. Bob Riley on Sunday signed a State of Emergency in Alabama due to the approaching winter storm. Standing next to Gov. Riley is Sonny Reagan, the Governor’s Legal Advisor and a major in the Alabama National Guard.