Chamber hopes to bring back fireworks 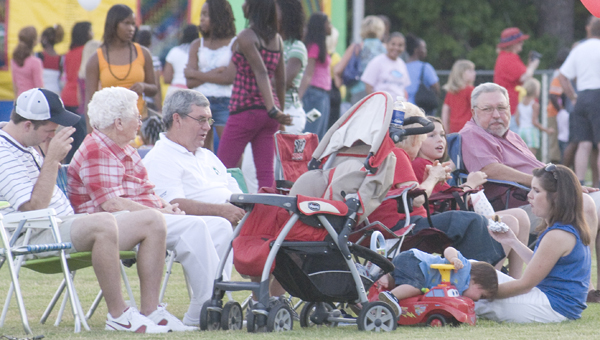 People lined the field of Tiger Stadium in Greenville for the Chamber of Commerce’s Celebrate America in 2009. The event was cancelled in 2010, but officials hope to bring it back in June or July.

The rocket’s red glare could be returning to Tiger Stadium for Independence Day 2011.

Continued economic constraints and the escalating cost of a professional fireworks display forced the cancellation of the Greenville Area Chamber of Commerce’s annual Celebrate America event in 2010.

“With everyone cutting back, and our costs going up every year, we decided not to have our July 4 event last year, but we don’t want that to become a permanent thing,” GACOC executive director Francine Wasden told members of the Greenville Lions Club Monday as she reviewed the past year at the Chamber and looked ahead to the future.

“Things seem to be improving on the economic front and we already thinking of how we can make Celebrate America happen again in 2011. We want to bring back our fireworks show and perhaps consider a parade in conjunction with it. This is definitely something on the forefront we will be working on. It is such a great community event.”

Wasden declared Greenville’s celebration of the Year of Small Towns and Downtowns in October 2010 a great success and a highlight of 2010 for the Chamber.

“I would have to say our Trick or Treat on Commerce Street was a real hit, and now that people has seen how successful it can be, we will be seeing more businesses and participants all up and down the street this October. The weekend was also a great time to talk up Old Time Farm Day, which draws a crowd to our county. We are not sure about all the other events, but we would definitely like to keep certain events going as an annual thing,” Wasden said.

2010 also brought back an old tradition: the annual Chamber Banquet.

“Last year was the first banquet we’d held since the 1970s, and we had a good turnout for a hometown girl, author Melinda Rainey Thompson. We have several potential speakers we are considering, so we are looking forward to another great meal and time of networking and fellowship for our community,” Wasden said. This year’s banquet is set for February 24.

The Chamber director said the new satellite display of items from Black Belt Treasures of Camden was also drawing much interest at the Depot. “There is a wonderful collection of unusual and one-of-a-kind items here, from pottery and quilts from Gee’s Bend to some great books. We had out-of-state visitors who stopped in and shopped with us over the holidays, and 20 percent of the sales come back to our Chamber,” Wasden said.

New stickers will be appearing for Chamber members in the coming months, once again featuring a variation on original camellia artwork by local artist Shirley Roberson, the director said.

“We have several businesses who are making inquiries about our area. This proves people are still optimistic and looking at opening new businesses, which is a very positive sign, Wasden said.