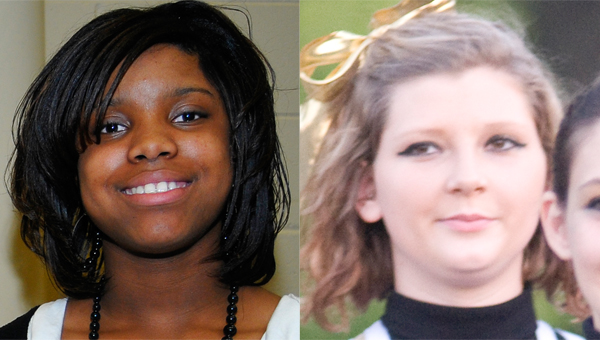 Airionia Wilkerson, left, and Cheyenne Connor, were two of the teenagers injured in separate accidents this holiday weekend.

Former GHS cheerleader Cheyenne Connor, 16, and her passenger Karlie Hill, 17, were Lifeflighted out on Thursday after Connor’s 2000 Oldsmobile collided with a 1996 Ford, according to the Evergreen State Trooper Post.

GHS cheerleader sponsor Kim Bowen has kept in touch with Connor and said that she is slowly recovering after incurring a broken hip, arm and collarbone from the collision.  Bowen said that Connor is stable and awake and is starting on a long road to recovery.

The occupants of the other vehicle, James McQueen, 35, and Willie Crittenden, 49, each incurred minor injuries, but did not need to be Lifeflighted out, trooper personnel said.

Saturday, a one-car accident left Airionia Wilkerson, 16,  cheerleader  at GHS, with a string of injuries. The wreck occurred Saturday at 6:05 p.m. on CR-42, with troopers from the Evergreen Post responding.

Wilkerson incurred a broken neck, arm and had to have several stitches and staples in her head, Bowen said.

Wilkerson is in stable condition, Bowen said, and is expected to be released in the coming days.

Bowen asked if the people of Greenville would keep these teenagers and their families in their thoughts and prayers.