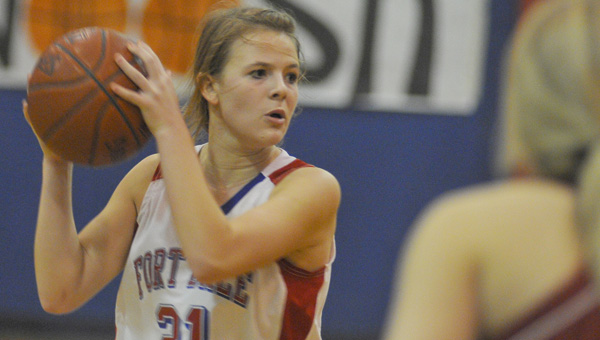 By Glenn Branum
Special to The Advocate

The Fort Dale Academy’s girl’s basketball team competed in the Huntingdon College Christmas Basketball Tournament this week coming away with the tournament championship.  The Lady Eagles beat Tuscaloosa Academy in the first round 40-31 and then Autauga Academy in the semifinals 31-29 to set up a showdown with Lee Scott Academy, the number one ranked team in the AISA.  Fort Dale pulled out the win 35-34 in an exciting game.

The Lady Eagles fell behind early but fought back to tie the score with three minutes left in the game.  The teams exchanged scores before Lee Scott hit a couple of baskets to take a five point lead with less than a minute to go. A steal and subsequent score by Barrett Leverette closed the margin to 34-31 with 30.8 seconds remaining.

A quick foul by the Lady Eagles put Lee Scott at the free throw line.  Murphy Middleton rebounded the missed free throw and made an outlet pass to Lori Fail who drove the length of the floor to hit a layup to make the score 34-33.  Jessie Langford stole the Lee Scott inbounds pass and Anne Mathews was fouled shooting with 10.6 seconds remaining and Fort Dale trailing by one.  She calmly sank both free throws to give Fort Dale its first lead of the game at 35-34.  A quick shot by Lee Scott missed its mark and Murphy Middleton rebounded the shot to preserve the win.

“It is the best AISA tournament in the state, and we were able to win three games in three days against some good competition” said Coach Reggie Mantooth.  “Winning the Championship against Lee-Scott should give us confidence heading into January and area play.  We have played a tough early season schedule that should prepare our team for the rest of the year.”

The Eagles will be back in action Tuesday January 4 at Monroe Academy.