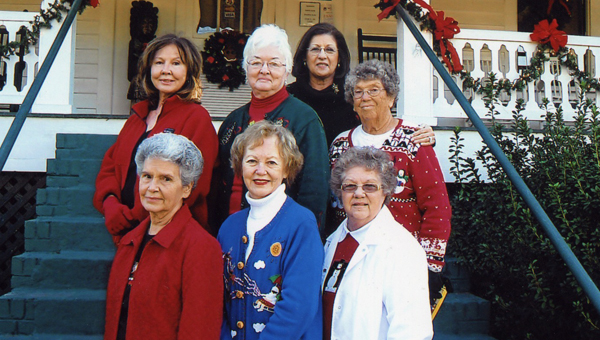 The Georgiana Garden Club members got into the spirit of Christmas as they entered the beautifully decorated cabin for their Christmas Party Thursday morning, Dec. 2. Live red poinsettias, greenery and red candles adorned the tables and mantel and lighted Christmas trees were placed as focal points around the room. The aroma of hot cider punch filled the air as hostesses Sandra Jones and Pat Compton and president Suzy Shepherd greeted the guests.

Due to the closing of the daycare center, club members decorated a Christmas tree for the local post office this year. Many who came by to purchase stamps or mail packages enjoyed the club’s handiwork. Afterwards, members returned to the cabin to enjoy a covered dish lunch provided by the members.

Treasurer Ann Quates gave her report. As chairman of the club’s Cake Walk for the fall festival, she reported the success of the event and expressed thanks to the club members and locaed citizens who donated money, cakes and candy.

The District VI meeting was discussed. Shepherd, who is also District VI director, expressed her appreciation to Judy Manning, vice-director, for taking charge of the fall meeting in her absence. Special thanks were given to the club members for their help with refreshments, door prizes, goodie bags and bird bath raffle tickets. The District presented the vice-director with checks for all 11 State Youth Contest winners from Georgiana, McKenzie, Luverne and Trinity schools.

Following lunch, members enjoyed playing “Dirty Santa” and exchanging Christmas ornaments. Shepherd presented each members with a bookmark of the Legend of the Candy Cane. Just for fun, members who were not dressed in holiday finery were fined 25 cents, but no one had failed to turn out in their festive best. Wanda Williams and Ellen Bush were the lucky door prize winners for the day.

The club voted to sponsor children through DHR for Christmas and to make goodies for the shut-ins for a Garden Therapy Project. For November’s Garden Therapy, club members taught patients at the nursing home how to make pine cone bird feeders.

Everyone was encouraged to attend the “Every Light a Prayer for Peace” and “Club Members Tea” at the State Capitol on Dec. 3.

After the club’s adjournment, the club members decorated the Hank Williams Museum for Christmas. Lighted green garlands and red bows were suspended from the porch railings and a large gingerbread man wreath was a highlight of the front door. The senior center will be decorated at a later date as will the planting of daffodil bulbs.

Due to illness in the Shepherd family, there was no November club meeting.

The January 7 meeting will be hosted by Wanda Williams and Carolyn Thompson, with program speaker Paul Huggins, speaking on “Controlling Litter.”