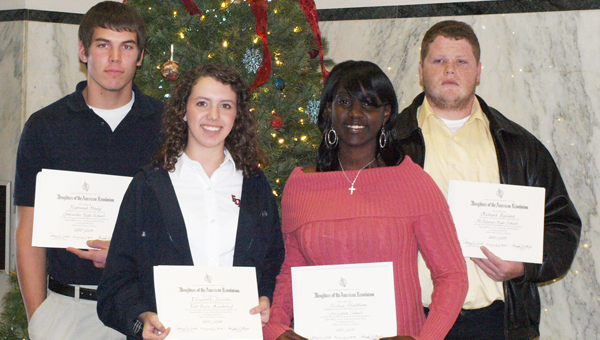 The DAR Good Citizen Program promotes good citizenship among high school seniors who demonstrate qualities of dependability, leadership, service and patriotism.
The students are nominated and selected by teachers, administrators and students from their schools. Once selected, the students submit transcripts, letters of recommendation, an introductory letter and an essay of history, heritage and patriotism.

The essays are judged locally and then at state level. Aleshia Cheatham wrote the winning essay with her essay going on to vie at the state level. The Fort Dale chapter of the DAR is happy to recognize these outstanding students and appreciates the support and participation of the guidance counselors from all area high schools: Todd Henderson, GHS; Janet Brantley, FDA;  Amanda Jones, Georgiana and Carol Williams, McKenzie.