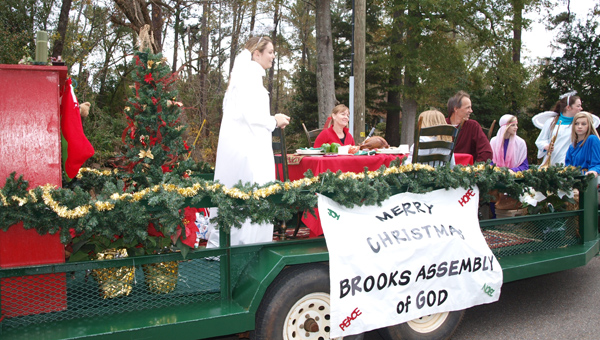 This float from Brooks Assembly of God was a first place winner in both the McKenzie and Georgiana Christmas parades. The float featured many details of a joyous family celebration, right down to the real food on the table. (Advocate Staff, Angie Long)

Mild temperatures brought many spectators out on Saturday to enjoy parades and other holiday events in south Butler County. Clear blue skies over McKenzie Saturday morning brought Santa, pint-sized and teenaged twirlers, a force of four-wheelers, local equestrians, a mule-drawn wagon and much more to Main Street in the little town.

Among those appearing in ths 2010 McKenzie Christmas parade were young Robert Shufford, who took part in the Atlanta Falcons Punt, Pass and Kick Team Championship, while Georgiana Civitan Club president Byron Ward and family members made their first appearance in the parade representing the newest civic organization in south Butler County.

Clouds and winds moved in to Georgiana in the afternoon, but it didn’t stop the parade passing by, complete with smiling dancers from the Persimmon Creek Cloggers, a bevy of festive members from Long Creek Community Church, Mt. Pisgah and Shiloh Baptist, and a large contingent of young musicians, flag bearers and twirlers representing Georgiana School. The Georgiana Civitans made a second parade appearance, this time with an attractive float in tow featuring their signature colors of blue and gold.

Second time proved a charm for the folks from Brooks Assembly and the Burning Bush Center, with their floats once again taking first and second place, respectively, with the parade judges. The “Hankin’ for a Merry Christmas” float from the Hank Williams Sr. Fan Club took third place in the contest.

“We had a really good turnout for the parade and I thought things went very well,” said Georgiana mayor Mike Middleton.

“We’ve had a good day. A lot of support from the community,” said Sue Gaston, who was playing cashier at the club’s bazaar, where everything from Auburn and Alabama-themed holiday decorations, white elephant bargains, blueberry jam, custard pies and cute, colorful and eclectic scarves were for sale, along with their trademark boxed lunches. Last year, the club gave away more than $15,000 in monies raised to such causes as Safe Harbor, the Greenville Area Arts Council, college scholarships, the Butler County Humane Society, Girls’ State and more, in addition to assisting needy individuals and families in the area.

At the Hank open house, visitors enjoyed tasty treats such as fruitcake, Christmas cookies and punch amidst festive decorations. Several door prizes were given away, and $242 was raised for the fan club through their $100 bill raffle.

“We were so proud to take part in such a wonderful community event for the second year,” said vice-president Sherri Brackin, who played an elf aboard the float, helping toss small stuffed animals to youngsters lining the sidewalks.

“It’s always such a joy to see the smiling faces of the children, and the adults, along the parade route at Christmas,” Brackin said.

“We had a great open house, and for anyone who didn’t get to stop by and see us at Christmas, please drop by and say hello at our Hank Williams Festival on May 20 and 21, 2011.”