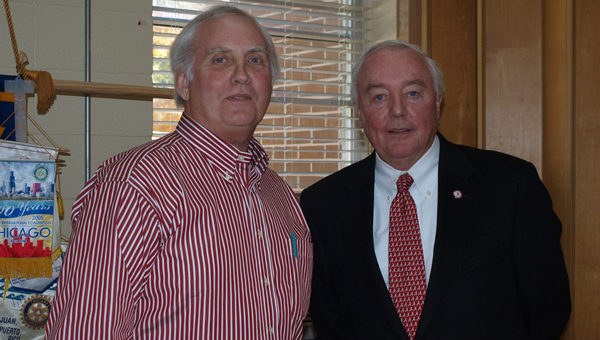 Pat Whetstone, right, director of alumni affairs at the University of Alabama and executive director of the the National Alumni Association, was Rotarian Ricky McLaney's guest. (Advocate Staff, Angie Long)

Pat Whetstone, a Greenville native, is due to retire in April 2011 after 20 years of service at the Capstone. On Thursday, at the Rotary Club of Greenville’s weekly meeting, he spoke of the university’s growth, with ten new residence halls, two new dining halls, four new academic halls and a number of remodeling projects on the campus. The school had 125 National Merit scholars in its freshman class for fall 2010, with 1.659 students going out for Fall Rush, the largest number in the U.S. The U of A now exceeds 30,000 students, including a number of out-of-state students, Whetstone said.