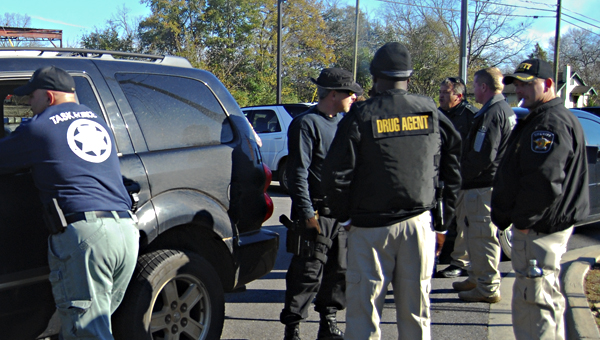 The operation was the culimnation of a 6-month investigation and required cooperation across many departments.

Starting at around 5 a.m. this morning, law enforcement rounded up 22 suspects on drug charges.

Chief Lonzo Ingram said that today was a good day for all law abiding citizens in Butler County. Though nine suspects are still at large, Ingram said the operation was successful at getting more drugs off the street.

“So many other crimes are drug-related, especially property crime,” said Ingram. “We will keep looking for all these people until we get each one of them in custody.”

Sheriff Kenny Harden said the operation was the result of a 6-month investigation that targeted known drug dealers, with the range of drugs spanning from pills and marijuana to crack cocaine.

“We had no officers hurt and we took a lot of dope dealers off the street,” Harden said.”

Most suspects were still asleep when police arrived early this morning. Harden said hitting them early increased the chances of finding them at home.

Arrests for illegally possessing prescription medications were common this time around, said Harden.

“Abuse of prescription medicines like Lortab, Xanax and OxyContin is a growing problem,” Harden said. “This isn’t the first time we have done busts like this. By working this hard on drug-related cases in our county, we have been able to reduce the amount of drugs in the county and cut down on property crimes.”

The following persons were arrested and charged with distribution of a controlled substance.