Flurry of festivities in south Butler this weekend 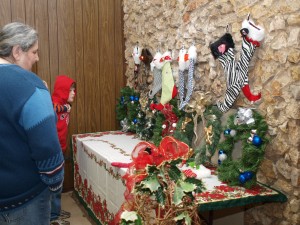 There will be a host of holiday happenings in south Butler County as McKenzie and Georgiana ring in the Christmas season this weekend.

Beginning at 10 a.m. in downtown McKenzie, folks are invited to dress warm and line Main Street for the community’s annual Christmas parade. Expect colorful floats and decorated vehicles from churches, VFDs, organizations and businesses, along with bands and equestrian entries. Bring your bags for the candy to be thrown as the parade travels down the route and doubles back, with Santa himself bringing up the rear on the McKenzie VFD fire truck.

Following the McKenzie parade, travel to Georgiana for the annual Three Arts Club Christmas Bazaar, which gets underway at 10 a.m. until 2 p.m. at the Community House downtown.

“Santa will be with us in between parades, so bring your children to sit on his lap and share their Christmas lists, and bring your cameras to take their photos—or get your photo taken with Santa,” said Becky Manning of the Three Arts Club.

Along with jolly old Saint Nick, the bazaar will offer the club’s annual boxed lunches, along with an array of crafts from crocheted items to Christmas ornaments, holiday wreaths and stockings, and much more. Baked goods, including breads, cakes, cookies, and pies, will be in abundance, along with an expanded selection of homemade preserves, jams, jellies, pickles and relishes.

“We also plan to offer our brand-new cookbook filled with great recipes at the bazaar. This would make a great stocking stuffer or gift,” Manning said. The cookbook features original drawings by local artist Willodean Brown along with hundreds of tried-and-true recipes from past and present members and Three Arts scholarship winners.

All proceeds from the bazaar go to fund the many charitable projects supported by the club throughout the county.

At 2 p.m., the action shifts to Palmer Ave. and winds through the downtown square as the Georgiana Christmas Parade gets underway with Georgiana’s finest leading the way with more floats, vehicles, bands and lots and lots of candy for the kiddies and kids at heart—and Santa, of course.

One of the floats will be representing the Hank Williams International Fan Club, which will hold its second annual open house right after the parade at the clubhouse on Rose Street. The event runs until 6 p.m.

“Come and join us and see the place beautifully decorated for Christmas,” said Sherri Brackin, vice-president of the fan club.

“We’ll have lots of good holiday refreshments, door prizes and a raffle for a $100 bill—which will come in very handy for Christmas shopping. So stop by for a few minutes or stay for a while and enjoy the Christmas season in Hank’s old stompin’ grounds.”