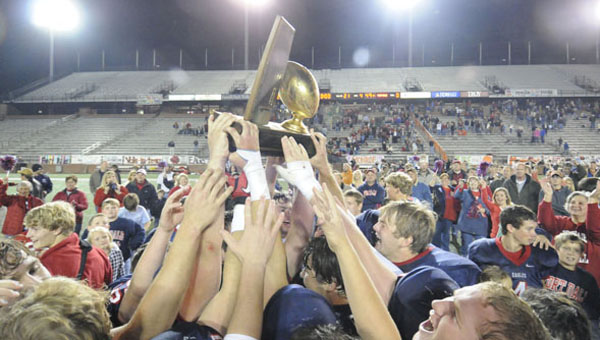 It is doubtful that Monroe will be volunteering to play the Fort Dale Eagles anytime soon, after a 49-21 rout that spoiled the Volunteer’s previously undefeated season.  With this victory, Fort Dale (10-3) earned the right to be called the 2010 AAA State Champions.

“We had to limp through the end of the season and it cost us a game or two in the middle, but we were playing for that prize at the end,” said Sampley. “I am so proud of my players. They really stepped up and did what they  came to do.”

Fort Dale received first but failed to move the ball. The Eagles had one first down before a sack forced a punt, giving Monroe (12-1) its first possession.

It didn’t take long for running back Sam Vermilyea to take it all the way to give Monroe an early lead with 8:24 left in the first.

The Eagles struck back, with a 48 yard run by Hunter Armstrong putting Fort Dale in prime position. Manny Norrell took it another 12 yards, giving Armstrong the opportunity to run it in for the touchdown. Patrick Russell tied it up with the extra point, knotting it at 7-7.

Monroe slipped in another seven points early in the second, but the rest of the quarter showed little offense from either side. However, Manny Norrell was determined to get Fort Dale back into scoring position, taking it four, 10 and then five yards. With seven seconds left on the clock, Armstrong snapped the final play and his pass floated over the shoulder of Ryan Salter right into the sophomore’s hands to tie the game 14-14.

Whatever  Sampley told his Eagles at halftime worked. Fort Dale forced Monroe to punt on their first possession, and then followed it up with a 41-yard pass from Armstrong to Stephen Till.  Perry Singleton broke through the line and picked up a three-yard touchdown to give Fort Dale the lead for the first time in the game.

But the momemetum was only getting going. Fort Dale recovered an onside kick at the 47-yard line. Then Armstrong was brought down after a 30-yard gain the next play, only to score off a keeper three plays later. Patrick Russell, who did not miss a kick the entire night, picked up the extra point to make it 35-14.

The Volunteers rallied for seven points. Fort Dale, however, refused to let Monroe cut their lead down. Norrell added a seven-yard touchdown run late in the fourth.
Till capped off the victory, picking off a Monroe Academy pass and returning it for the final touchdown.

It was an emotional time for players and fans alike, as the entire stadium emptied to swarm the field.

“We knew we were facing a great team,” Armstrong said. “We knew we had to execute our gameplan, and we did and came out on top.”
Armstrong led all rushers, with 28 carries for 172 yards. Norrell picked up 123 off 18 carries.

Fort Dale kept it out of the air for most of the game, but Armstrong did complete five-of-eight attempts for 94 yards.

Till was the hot receiver, going 76 yards off two receptions.

Till also had 12 tackles to lead the defensive effort. Singleton had seven.

Fort Dale running back Manny Norrell dives for the goaline in the second half. (Advocate Staff, Ashley Vansant) It’s a final:... read more