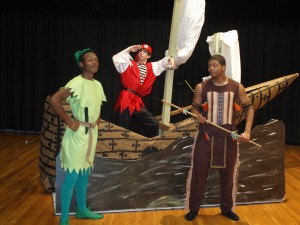 What happens when a no-nonsense, “just the facts, ma’am” librarian who hates fairy tales finds herself suspected of murdering Peter Pantaloon’s shadow? That’s the question answered in the latest offering from the Greenville High School Old Gym Players.

“CSI: Never-Ever Land” provides a humorous spin on both wildly popular crime shows (the lab rat is, well, a rat) and beloved storybook characters that just might resemble certain JM Barrie creations who will “never grow up.”

“The kids are having a blast with this. They really love doing comedies and this is a very fun show with lots of pop culture references,” said Naomi Pryor, GHS theater arts instructor and director of the play.

The young actors are also trying to raise funds for the auditorium stage curtains.

“The curtains are really in a state of disrepair, and it will cost $5,000 to replace them. So we’ll have donation jars set up at the shows and really appreciate whatever amount folks can give,” Pryor said.

“And we hope lots of people will come out and support this show and our students.”

Want to enjoy the fragrant beauty of a “real” Christmas tree this year? The Greenville Rotary Club is once... read more