Jones sworn in as newest member of BOE 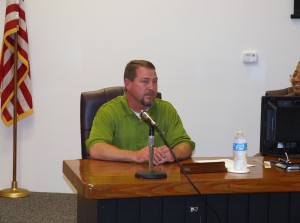 Mickey Jones of McKenzie was named as Johnny Lee's replacement for District 5 of the Butler County Board of Education.

Mickey Jones is the newest member of the Butler County Board of Education. Jones, who is taking the position vacated by Johnny Lee, was sworn in as the representative for District 5 by Judge MacDonald Russell at Thursday night’s November board meeting.

Jones, a McKenzie graduate and parent and project manager for ALDOT, received the highest overall score of the six applicants for the position, which opened after Lee’s resignation this fall. All the candidates were interviewed in a public forum by the sitting board members, who then rated each applicant on a scale of one to four, with their scores tabulated by board attorney Pete Hamilton.

“I want to express a word of appreciation for all six candidates who took interest and time to come and talk with us,” said board member and newly elected BOE vice-president, Joe Lisenby.

“I think it was a very good thing we had six people to choose from; it speaks well of that district. They should all be commended.”

Following Jones’ swearing in, he was welcomed to take his seat on the dais alongside the other board members for the remainder of the meeting.

“I want to thank you all for this opportunity and also thank my family and supporters who are here tonight from McKenzie,” Jones said.

Linda Hamilton, who was approved by the board as the BOE president for 2010-2011, said the board had a difficult decision in choosing the replacement for Lee.

“We had great candidates,” she said. “We are delightfully proud so many citizens stepped forward and wanted to play a part in our children’s education in Butler County.”