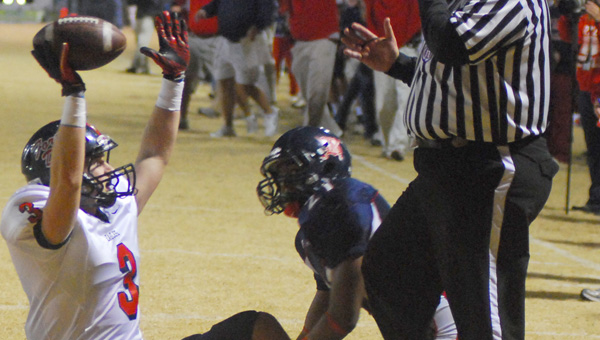 The Eagles are heading to the 3A championship after ending the Bessemer Academy Rebels playoff hopes and undefeated season with one decisive 38-7 victory.
Things started good and stayed that way for the Eagles.

Manny Norrell ran in the sole touchdown of the first quarter, to put the Eagles ahead 7 -0 at the start of the second quarter.

“When we start out strong, it makes a big difference,” said coach James “Speed” Sampley. “We ran the ball a lot, because we got out ahead and didn’t want to put the ball in the air that much.”
Norrell battered his way into the endzone with 10:50 left in the second to increase the Fort Dale lead 14-0.

The Rebels rallied back, driving their way to the 10-yard line before an interception by Ryan Taylor stopped the Bessemer advance.

With not much time left in the second, the Eagles started a desperate drive to grab more points before the half. With 0:18 left on the clock and no timeouts remaining, Armstrong spiked the ball to give the Eagles one more shot. Eli Blackmon scooped up the screen pass, making the Fort Dale lead at half 21-0.

The Rebels got onto the scoreboard off their first third quarter possession, as a Bessemer receiver got one foot down in the back corner of the endzone for the score.

The next possession ended in a deep punt by Blackmon, which put the Rebels on their own 16 yard line. Ryan Salter, however, stopped the thir down conversion from materializing by knocking a near-completion right out of the receiver’s hands to force a punt.

Norrell ran the ball down Bessemer’s throat with a 64-yard return, thanks to some hard hitting leading blocks.

“Our team played more physical, which was what we wanted going into this game,” Sampley said.

Armstrong spanned the field with a 71-yard keeper to put Fort Dale within striking distance once again on Bessemer’s seven. Sticking true to the Eagle’s “pass less, run more mentality”, Armstrong kept it again to bring the tally to 35-7.

Patrick Russell, who had already sailed five extra points through the uprights for the night, added a final three points to the tally with a 34-yard field goal making the final score 38-7.

The Eagles put up 432 rushing yards and 50 yards passing for 482 yards total offense.

Eli Blackmon had 3 receptions for the night for 23 yards and one touchdown. Salter claimed two for 32 total yards.

Singleton and Patten Thompson kept the Rebels on the ground with eight tackles apiece. The Eagles will now prepare for Troy and Monroe Academy, which downed Fort Dale earlier this year.

“Monroe is the best team in the state, and we are going to have to be playing at the top of our potential to be ready,” Sampley said.