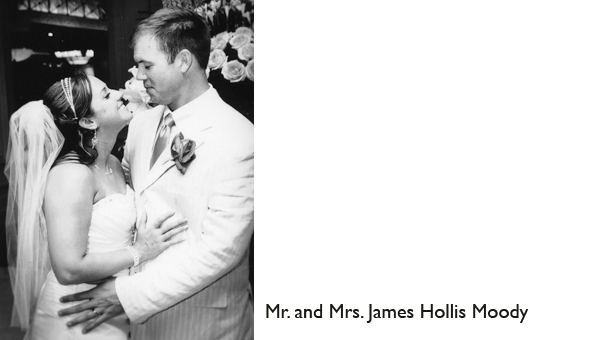 Ashley Brooke Ramon and James Hollis Moody were married at 7 p.m. August 27, 2010, with a small group of family and friends looking on.

The ceremony was in Juno Garden at Caesar’s Palace, Las Vegas, Nevada.

The bride is the daughter of James and Cheryl Voyles of Sarasota, Florida, and Rick and Starr Ramon, also of Sarasota.

The groom is the son of Jim and Brenda Moody of Greenville.

Fallon Enfinger and Janelle Garcia were attendants of the bride. Bo Tucker of Fairhope, Alabama, and Daniel Branum of Greenville were groomsmen.

The wedding party and guests boarded the “World’s Biggest Limo” for a scenic tour of the lights of Vegas.

The culmination of the evening was an informal reception at Mandalay Bay, Las Vegas.

The couple had a “mini-moon” in Vegas surrounded by family and friends. Their future honeymoon plans are to backpack through Europe.