Ballew, Jones to wed in December 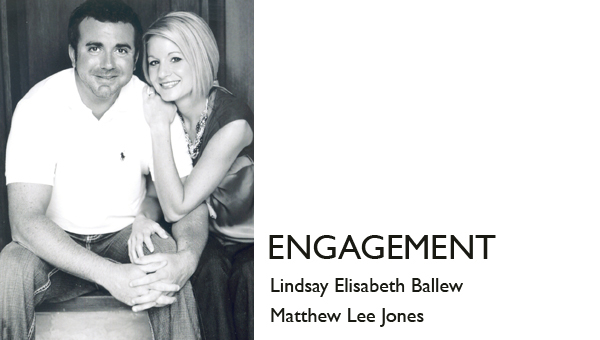 Mr. and Mrs. Barry Michael Ballew of Georgiana announce the engagement of their daughter, Lindsay Elisabeth Ballew, to Matthew Lee Jones, son of Mr. and Mrs. Russell Tamasco of Mobile.

The bride-elect is the granddaughter of Mr. William M. Huggins of Georgiana and the late Mrs. Dorothy Parks Huggins, and Mrs. Mary Lane Ballew of Oneonta and the late Mr. Bobby G. Ballew.

The prospective groom is the grandson of the late Mr. and Mrs. Russell and Billie Tamasco of Grand Bay, and Russell and Gwen Gorman of Pascagoula, Miss.

Miss Ballew is a 2002 graduate of Fort Dale Academy. She received a Leadership Scholarship to LBW Community College and attended in 2002-03 before transferring to Troy University in 2005.

She is a 2009 graduate of Troy University where she earned a Bachelor of Science in Nursing. She is a member of Phi Mu sorority. While at Troy, Miss Ballew was active with Campus Outreach.

She is employed with Baptist Medical South Trauma Surgery Unit.

Mr. Jones is a 1996 graduate of Mobile Christian Academy and a 2000 graduate of the University of South Alabama with a Bachelor of Science, Accounting. While at USA, he was the president of Beta Gamma Sigma and a member of the Mortar Board.

The couple will marry Dec. 18, 2010 at Mount Pleasant Baptist Church.