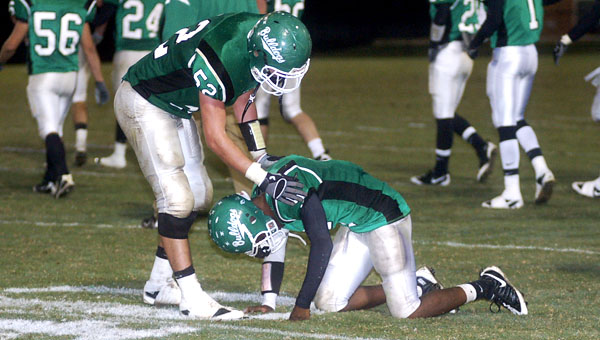 Devonte Porter gets comforted by a teammate after McIntosh's upset of Brantley.

Despite a furious last-minute comeback attempt, the Brantley Bulldogs were unable to overcome McIntosh as the Demons pulled off a 23-20 upset Friday night.

The game started well enough for Brantley with the Bulldogs capitalizing on a pair of McIntosh miscues to pull out to an early lead.

Following a blocked punt, Devonte Porter scored from two yards out to put Brantley ahead 8-0, and the Bulldogs recovered a fumble on McIntosh’s first play from scrimmage.

Again, Porter ran it in from two yards out to make the score 14-0.

The Demons then turned to the passing game and found holes in Brantley’s secondary that led to touchdown passes of 21 and 38 yards.  A two-point conversion and extra point put McIntosh up 15-14 midway through the second quarter.

Brantley’s defense stepped up in the third quarter as Porter picked off a pass and raced 50 yards to the McIntosh 12, but the offense stalled and a missed field goal from 23 yards out ended the drive.

The clincher came when McIntosh scored on fourth and eight from Brantley’s 17-yard line with a touchdown pass.  The two-point conversion made it a two-possession game, 23-14.

While it looked like McIntosh might be able to run the clock out, Brantley’s Jared Wiley recovered a fumble and rumbled down to the Demons’ 11-yard line with under a minute to play.

A couple of plays later, Justus Harvey connected with Chester Person for a touchdown to bring it to 23-20.

The improbable comeback looked possible after the Bulldogs recovered the onside kick at McIntosh’s 35-yard line, but an interception with eight seconds to play ended the game.

“We didn’t quit,” said head coach David Lowery. “We gave ourselves a chance there at the end.”
Lowery said part of the Bulldogs’ trouble on offense has come because of injuries.

“We’ve just been depleted as the game and the season has gone on, but I don’t want to make excuses,” he said. “Our offense has had trouble getting in sync in part because the lineup has been different each of the last several weeks.”

The loss ends Brantley’s season, and the Bulldogs finish with a record of 8-3.