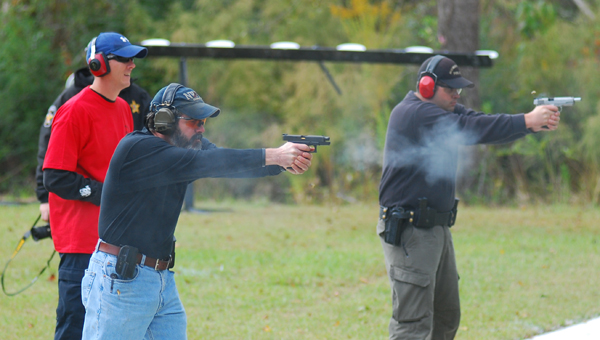 Around 15 law enforcement departments from around the area gathered off Highway 31 at the Greenville Firing Range Friday to find out who had the surest shot.

This marks the second year the Steel Range Event had been held, said Capt. Randall Courtney with the Greenville Police Department.

“It’s a great event, and we plan on continuing this every year from now on,” Courtney said. “Last year, we had about 23 shooters and this year we grew to about 40.”

For the second event, Courtney said, shooters had to run through hitting fall-down targets before moving onto the third event, dueling trees, where officers battled head-to-head to see who could knock down all targets the fastest.

The final event takes the winners of all three events and puts them in a combat style course to determine who has the top gun.

“It’s great to get all these guys together, and get some camaraderie going along with some networking between departments,” Courtney said. “Plus, it’s a lot of fun, and it’s a training event, give them a chance to work on their shooting skills.”