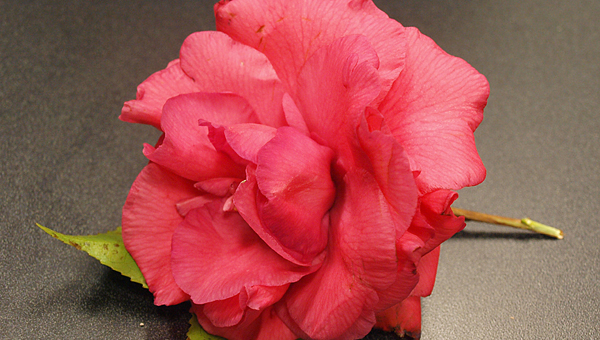 This lovely camellia from the garden of Barbara Middleton is among the first of this year's camellia season. If you have camellias of your own blooming, please stop by our office at 103 Hickory Street in Greenville and let us take your photograph with your own beautiful bloom to share with the community. (Advocate Staff, Angie Long)

Editor’s note: Former Greenville Advocate editor/publisher J. Glenn Stanley was an ardent camellia enthusiast who encouraged local citizens, businesses, schools, churches and clubs to plant camellias. He also championed the cause of Greenville taking on the title of “The Camellia City.”  In 1953, he penned an article for the American Camellia Yearbook detailing why, of all the cities in the nation bearing that title, only Greenville truly deserved to be called “The Camellia City.” Graciously submitted by Shirley Roberson.

By J. Glenn Stanley
Special to The Advocate

There are several cities in the South to which the appellation “Camellia City” has been applied. The citizens of Greenville, Alabama, are convinced that theirs is the only city that should be known by this name.

While they had known of the large number of fine old camellias that were growing within the city, it remained for a visitor, Ben Arthur Davis, Garden Editor of Holland’s magazine, to call particular attention to this condition.

During the course of a visit in 1937, Mr. Davis made a remark to the effect he had never seen so many large camellia plants in any one city.

This remark was overheard by the editor of the local newspaper and from then on he never overlooked an opportunity to refer to Greenville as “The Camellia City.” He adopted as the official “ears” of the paper the slogan_”Greenville, The Camellia City.” (The “ears” of a newspaper is the design or slogan that appears on either side of the masthead of the front page).

This slogan was in turn adopted by city officials, members of civic organizations and business men. One dairy features the pictures of three well-known local camellias, Pride of Greenville, Beauty of Greenville and Alba Plena, on cartons in which the milk is distributed.

Citizens selected the camellia as the city flower, and began to set out camellias by the thousands.

Today there are only a few lawns without at least one camellia, and in almost every instance the lawn without a camellia is owned by a non-resident. Even there, many tenants have planted camellias.

There are long streets without a single exception to the rule of camellias on every lawn. They are used as foundation plantings by the builders of new houses.

Along with this upsurge of interest in camellias, the desirability of changing the name of a camellia plant of local fame from “Henderson” to “Pride of Greenville” was suggested.

The story behind the plant that produces this large, bright red, full peony-form flower is an interesting one.

This distinctive plant was purchased by W.J. Beeland, about 1897, from a nurseryman in Springfield, Ohio.

In time the Beeland property was sold to the late C.C. Henderson who lived there many years, and later on  it was purchased by Mr. and Mrs. Ambrose Reese, the present owners.

The camellia flourished and the flowers proved distinctive, and this beautiful variety was coveted by almost everyone who saw it.

Efforts were made to get plants of the same variety from the nurseryman in Ohio. At that time, camellias were sold by color and not by name, and as the nurseryman was unable to identify the plant from the blooms sent to him, he was unable to fill the orders. Up to the present time, its true identity has never been established.

In all probability, the original plant was a seedling. It is now being propagated by several nurserymen under the name Pride of Greenville.

Other large camellias growing in Greenville fifteen years ago were in the Ralph Peagler group of four large plants. They were set out by members of the Kingsbury family about ninety years ago. Included in this group is a mammoth camellia with flowers that closley resemble Purity, an Elegans, a Madame de Strekaloff and one plant of an unknown variety.

On College Street there were large camellias of several varieties in the garden at Mrs. C.E. Hamilton’s home; at the Mrs. A.E. Gamble’s home; an old Elegans and an Elizabeth I the adjoining Crenshaw and Upton gardens; a twenty-foot camellia of an unidentified variety at Mrs. Broughton Wilkinson’s home; a large Prince Eugene Napoleon at the home of Judge James T. Beeland; and a hedge of old camellias of different varieties on the G.H. Tatum property.

On Hickory Street large plants of Sarah Frost and Nobilissima were growing in the gardens at the Rolfe Dunklin and Murphy homes, a Prof. C.S. Sargent at the J.C. Wilson home, and a huge Elegans and a very large Lallarook (Laurel Leaf) at the home now owned and occupied by the Hill Reids.

On the lawns of the Stabler Infirmary and Clinic were two large camellia plants whose identity is not known. Just east of the city a sixty-seven year old Alba Plena has grown to be what is probably the largest specimen of this variety on record. It dominates the planting at the plantation home of the Rufus Pooles. The Pat Lowes had three large plants on the lawn of their home—an Alba Plena, a Tricolor and a plant of its solid red sport. Since the time of Mr. Davis’ visit, the Lowes have set many camellia plants in a sunken garden on the opposite side of the house.

On West Commerce Street the Joe Richards and John Garners had large Tricolor plants, and further out on the same street Miss Mary Dunn has a collection that includes a large Prof. C.S. Sargent, Alba Plena, Pink Perfection and several other varieties. Near the Dunn home is a Sarah Frost of huge and perfect proportions.

The Percy Langford home was almost hidden by another Sarah Frost of great size. Another mammoth specimen of that variety was to be found on the Park Smith’s lawn on Cedar Street. On this same street there was a hundred-year-old Sarah Frost, and a large Nobilissima on the spacious grounds of the Oaks Hotel, a property now owned by the City of Greenville. At the Stanley home on Cedar Street there was a very large Monarch, and across the street a huge Sarah Frost features the lawn of Mrs. Dan Sherling’s home.

By reason of the presence of these numerous old camellia of tremendous size, the majority of which are still alive, the citizens of Greenville were justified in calling their municipality “The Camellia City.”

However, they were not content to rest upon their laurels-instead, they put into execution a comprehensive planting program which was participated in by citizens and public officials alike. This program became operative during the 1937-38 planting season, and has been followed since that time. Some of the new plants have attained considerable size and are beginning to rival the older ones. This is due to the better care and attention afforded the newcomers.

In January 1938, the first camellias to be set out on church property were planted on the grounds of the First Christian Church on West Commerce Street.

These plants have grown so vigorously that the church yard is almost filled. Every other church in Greenville followed this example.

During the same month, the planting of camellias on public property was started. Funds donated by members of the Lions Club and money appropriated by city officials were used to purchase camellias and plant them on the grounds of the new City Hall.

Since that time camellias have been set lout in front of the Community House, in the triangle formed by the intersection of College and Fort Dale streets, where travelers over Alabama Highway 185 could see the camellias as they entered the city, and also in parks and cemeteries. All of these plants have grown to be large ones.

In the same year, Henry Steindorff started to enlarge his camellia garden to such good effect that today he has one of the largest varietal collections in Alabama. Other residents, including Drs. Aubrey and Vernon Stabler, Dr. Philip Speir, Robert Beeland Jr. and E. Talbert, started to grow camellias and have many different varieties.

The members of the Greenville Garden Club have expended a considerable amount of time, money and effort in helping Greenville live up to its name as “The Camellia City.” In January 1937, a month before Mr. Davis visited Greenville and by his casual remark gave a great impetus to camellia culture, members of the Greenville Garden Club invited Perry McLain of Montgomery, Alabama, to give a talk on camellias. Mr. McLain, a native of Greenville, is one of the first men in Alabama to have taken a serious interest in camellias, and one of the first successful growers of these plants in Montgomery.

A year later, club members made up a list of camellias and authorized Mrs. G.C. Steindorff, Mrs. R.G. Hendrick and Mrs. H.P. Martin to proceed to Baldwin County, Alabama, to supervise the filling of this order.

This was something like carrying coals to Newcastle for many of the  nurserymen before the citizens had fully appreciated the value of their presence. It is known that these nurserymen had taken thousands of cuttings from two old Tricolor plants in Greenville’s Magnolia Cemetery. Old plants of Alba Plena, Elegans, Monarch and other old favorites around town, also served these dealer as propagating material.

Greenville’s annual camellia shows are outstanding in the state. The 1950 Show was attended by some five thousand visitors from all but eight of the sixty-seven counties in the state, this in spite of the fact that camellia shows were held in four other cities in Alabama on the same day. The 1952 show was well attended even though the season was an unfavorable one. Last year there were thirty-five hundred visitors, representing ninety-seven cities, twenty-one states and two foreign countries.