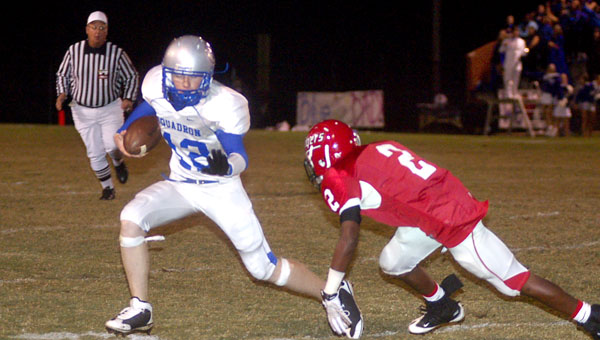 After a close first quarter, the Luverne Tigers used a strong second quarter to pull away from county rival Highland Home and earn a 33-14 victory.

The first quarter was scoreless, but the Tigers scored on the first play of the second quarter with a two-yard rush by Ladorian Jackson.

Two minutes later, Highland Home’s Kase Kelly connected with Raheem Berry, who had slipped behind the secondary, for a 50-yard touchdown pass that tied the game at six.

However, the Tigers got two touchdowns from Jonathan Chambers and another score from Tige Townsend to lead 26-6 at halftime.

In the second half, Chambers added one more touchdown on a three-yard run.

“Offensively, we couldn’t do much to get points on the board,” said Highland Home head coach Tom Pinkston. “We had several drives that stalled and we couldn’t finish it.  I’ve got to give credit to Luverne – they played well.”

“We made some strides this year, but we’re not where we want to be yet,” Pinkston added.

The loss ends Highland Home’s season, while Luverne will face Trinity next week in the opening round of the playoffs.

“We’ve got some things to work on, like holding onto the ball and getting off the field on third down,” Sanders said.