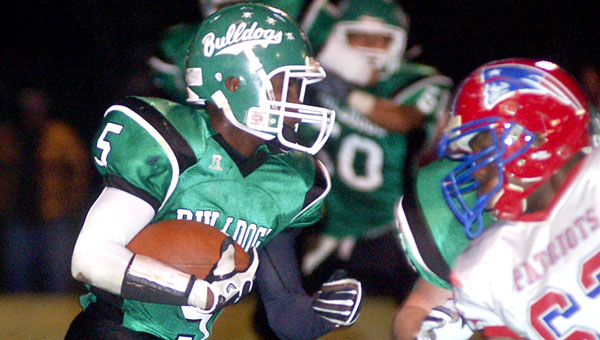 Devonte Porter runs the ball up the middle for Brantley.

While Brantley got the best of Linden in last year’s playoffs, the Patriots came away with a 42-7 win over the Bulldogs in the final regular-season game.

“We knew they were a good team,” said Brantley head coach David Lowery. “We had several players out, but I don’t know if having them back would have made much difference.”

It didn’t take long for the Patriots to get on the board as quarterback Anthony Robinson, Jr. hit Gerald Bruno for a 22-yard touchdown pass less than three minutes into the game.

With 5:35 left in the first quarter, Kendarius Fritts made the lead 12-0 with a three-yard run.

The Bulldogs showed signs of life early in the second quarter when quarterback Justus Harvey hit Chester Person for a 70-yard touchdown pass to cut the lead to 12-7.

However, the Patriots quickly returned the favor.

Three plays into the next drive, Fritts broke a 47-yard run to crack the game open.

Before the quarter was over, Robinson added an 11-yard touchdown run to make the margin 27-7 at halftime.

Despite a pair of turnovers, the second half was all Patriots as Linden scored both an offensive and a defensive touchdown.

Brantley plays host to McIntosh in the first round of the playoffs next week.

“We’ve got to find some healthy bodies before next week,” Lowery said.