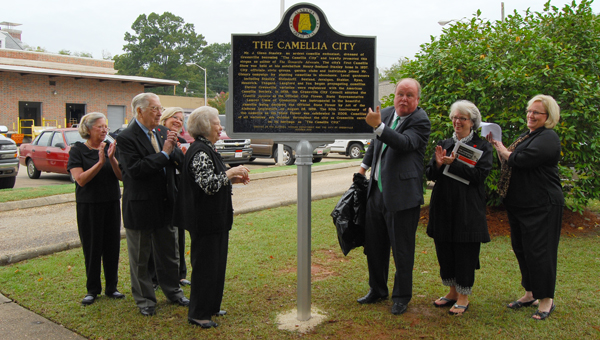 Attending the dedication for the new historic marker on the grounds of City Hall on Thursday are Laurie Alverson, Mollie Utley, Gene Hardin, Nonnie Hardin, Jeannie Nearing and Glenn Cooper, all members of the Stanley family. J. Glenn Stanley, longtime Greenville Advocate editor and camellia enthusiast, helped Greenville earn the nickname The Camellia City. His daughter, Nonnie Hardin, helped Mayor Dexter McLendon unveil the new marker, which provides a brief history of the city on one side, and the story behind "The Camellia City" on the other. (Advocate Photo/Austin Nelson).

On November 24, 2008, the Greenville City Council decided the weekend of October 28-30, 2010 would be the official homecoming as part of The Year of Alabama Small Town and Downtowns.

“That seemed like such a long time ago . . . and now it’s here,” an excited Francine Wasden, Greenville Area Chamber of Commerce director, said on Thursday morning.

The Great Greenville Homecoming arrived with the unveiling of a double-sided historic marker honoring the heritage of Greenville and its history as the Camellia City.

Preceding the presentation, Mayor Dexter McLendon lauded the passion long-time Greenville Advocate newspaper editor Glenn Stanley for both his job and his community.

“He had such a love for camellias and wanted to see this town known as The Camellia City, and that came to pass,” said McLendon.

The mayor shared a camellia painting by the late Jennie Vieve Poole that he termed “probably the most famous camellia painting in these parts,” along with historic photographs taken in 1959 when Alabama replaced the goldenrod with the camellia as the state flower. Sue Arnold, city clerk, pointed out then-governor John Patterson was sporting a camellia from Greenville in his lapel in one photo.

After the marker dedication, the celebration continued with a Rotary Luncheon at Beeland Park where McLendon served as guest speaker, discussing the future of the Camellia City with the Rotarians and their many guests.