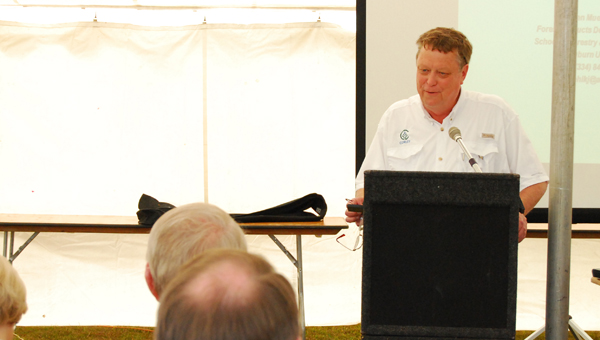 Frank Corley speaks to a group of landowners on Monday about the opporunity to sell their wood. (Advocate Photo/Austin Nelson)

Corley Land Service thinks they may have found a new, cheaper way to harvest biomass, and the discovery has helped earn them a $4.9 million grant for further research.

Frank Corley of Corley Land said four organizations, including Corley Land, Auburn University, the U.S. Forest Service and forest equipment manufacturer Tiger Cat all applied as one and were awarded the U.S. Department of Energy grant to develop new ways to harvest biomass at a lower cost to the supplier.

Corley said biomass will become increasingly important to this country’s energy needs in the future.

“Biomass is a term used for woody material that is going to be used to produce energy, either as liquid fuel or burned directly to produce steam,” Corley said. “It’s a renewable green alternative to fossil fuels.”

On Monday, scientists, landowners and forest employees came to hear more about the program. Corley said getting local landowners involved would be key to the program’s success.

“Soon, we will have some new equipment and new systems that we are going to deploy to harvest wood,” Corley said. “Forty percent of this grant’s money is to promote area landowners to sell us wood. These landowners will have a big opportunity as we are developing this system.”