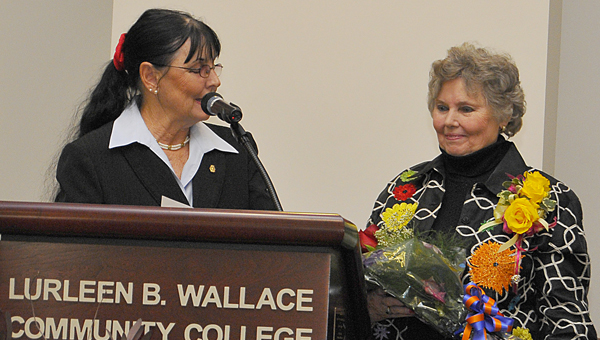 Her parting words to the crowd expressed the same sentiment seen among those attending the celebration: “Fare thee well.”

Not surprisingly, Dr. Jean Thompson, longtime English teacher and college administrator, chose words from the Bard of Avon himself.

Thompson, who retired in August from LBW Community College after 17 years, was honored at a program/reception held at the Greenville campus’s Wendell Mitchell Conference Center Sunday afternoon.

Family, friends, classmates, local and state dignitaries all turned out to hear anecdotes and accolades for the 51-year veteran of the classroom, who said the events of the day left her ready “to fly away with joy.”

“When I received my doctorate, I could have flown right off that stage. There’s no stage to fly off today-but it’s just wonderful all the same,” Thompson said.

A slide show prior to the event documented the Crenshaw County native’s life, with family and pet photos often dominating.

“If she had ever worked at an animal shelter, she would have adopted every one of them,” Dees said.

Many of her classmates from the Luverne High School Class of 1956 were present on Sunday, with Senator Wendell Mitchell, a fellow Crenshaw County native, expressing his belief “there’s something in the water there that produces outstanding folks.”

“If we had a Hall of Fame in Crenshaw County, Dr. Thompson would be in it,” Mitchell said.

The senator, who was a lower classman at LHS during Thompson’s time there, recalls her being a “smart student . . . from fine stock. Jean was a wonderful person from the beginning.”

After spending more than 30 years with DeKalb County Schools/DeKalb College in Georgia, Thompson decided she would seek out employment with LBW in 1993, a decision she says she hasn’t regretted a single moment.

“I will forever be grateful for this opportunity,” she said.

“It’s not the largest job I’ve had, but it is the best. Leaving behind such wonderful students, colleagues and administrators is the best way to go into retirement.”

Seth Hammett, president emeritus of LBWCC, said choosing Thompson was the best hiring decision he ever made.

Jerri Stroud, president of the LBWCC Foundation, lauded Thompson for her outstanding fundraising record for the school.

“You don’t have to be around Dr. Thompson for long to know her heart is for the students, helping them in the classroom and financially,” Stroud said.

And even though she is retired, Thompson isn’t quite done yet with LBWCC.