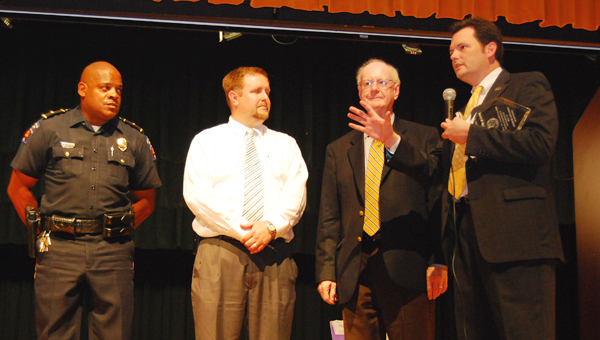 The faculty and students at Greenville High School all gathered Monday to be recognized for receiving the Attorney General Safe School Initiative Sustained Performance Award of Excellence. The award is given each year to schools with a proven track record of keeping safety first on campus.

King acknowledged in his introduction that this was the sixth time he had came to GHS to present the award.

“This is the most decorated safe school in Alabama,” King said. “I have been here to give this award more than I have visited any other school for any reason.”

King said that safe schools are essential to learning.

“Schools aren’t safe by accident,” King said. “They are safe because somebody has made safety a priority.”

Owens, who has been resource officer at GHS since 2000, said he has seen the school come a long way.

“It takes a total commitment from the community, including feedback from parents, law enforcement and the students to keep GHS safe,” Owens said. “A lot of these kids are 18 now, and I have practically raised them.”

Owens said that when it comes to discipline, he is stern, but compassionate.

“When you have to get on to a student, you don’t want to take away their dignity,” Owens said. “You need to do it with respect that lets them know that in the end, you are really trying to help them.”

By allowing students to keep their dignity, Owens said, they will be more likely to come back for future problems.