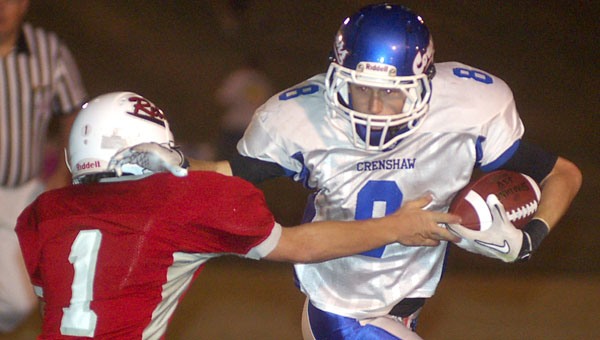 The Crenshaw County Academy Cougars jumped out to an early lead against Lowndes Academy and never let go on the way to a 27-14 victory.

The Cougars set the tone early with an interception by Austin Brown on the first defensive possession of the night.

On the first play of the ensuing drive, Michael D’Arville went 34 yards off right guard without being touched to put the Cougars up 7-0.

The next time CCA got the ball, the Cougars faced fourth down and five yards to go from the Lowndes 25-yard line, and Will Moses took the ball down to the three-yard line, where he would punch it in one play later to stretch the lead to 14-0.

The Rebels broke a big play early in the second quarter to cut it to 14-7, but Kyle Furr ran it in from five yards out with 2:08 to go before halftime to make it 21-7.

Lowndes Academy again cut it to one touchdown at the beginning of the fourth quarter, but again, the Cougars mounted a touchdown drive.

CCA worked the clock, and following a key conversion on fourth and six from the Lowndes 16-yard line, quarterback Pete King and the offensive line powered it in from a yard out on fourth and goal with 3:56 to play to seal the game.

Head coach Roland Jones said that one of the keys to the game was the play of the CCA defense, especially early in the game.

“We were worried about their offense,” he said. “I really can’t say enough about the preparation our kids put into the game. We knew we had to start big because once their offense gets going, they’re tough to stop.”

“They’ve got so many weapons, and we managed to keep them in check,” Jones added. “I’m extremely proud of our guys.  They laid it all on the line.”

The win kept the Cougars’ record perfect on the season, and put CCA alone at the top of the region standings.