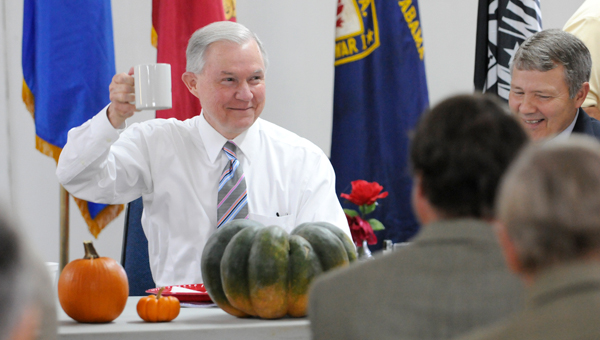 Sen. Jeff Sessions raises a cup of coffee as he is recognized at the American Legion Hall in Greenville. Sessions spoke to a local crowd of about 60 as an invited guest of the 9:30 Coffee Club. (Advocate Photo/Ashley Vansant)

U.S. Sen. Jeff Sessions came to the Camellia City for coffee and conversation at the American Legion Hall Wednesday, saying, “I got an offer I couldn’t refuse, so I didn’t refuse it.”

The senator had received a letter signed by 20 members of the 9:30 Coffee Club (formerly the Downtown Coffee Club) of Greenville applauding his conservative Republican principles on such issues as government bailouts of the private sector and nationalized healthcare.

In the letter, the members told the senator, “If you are ever down our way, come and talk to our group.”

And so he did.

Sessions said the new healthcare program, which he is “still firmly against,” would not go into full effect until 2014, providing time for its opponents to potentially eliminate it. “I think it’s possible . . . support by the American people has never been great for the new program and it seems to be sinking,” Sessions said.

The senator urged his audience to remember, “There’s no such thing as a free lunch.”

“You can’t borrow from the future and not have someone paying dearly for it down the road,” the senator said.

“We have a national debt of $5.7 trillion, which is expected to double in five years and triple in ten. We’ve got to become more frugal and do it now-not next year.”

According to Sessions, the government’s stimulus package has failed to create the many new jobs promised while plunging the nation even deeper in debt.

“The stimulus package just gives us more government. People become accustomed to monies and then the bureaucracy doesn’t want them to ever go away,” he said.

Accountability and productivity in government are the watchwords, Sessions said.

“This next election will be a defining factor in our nation’s future. With the potential of the government taking over healthcare and controlling the energy market, we could alter the nature of this republic as we’ve known it,” said Sessions.

At the conclusion of his talk, member Walter Parmer presented Sessions with his own honorary membership into the 9:30 Coffee Club.