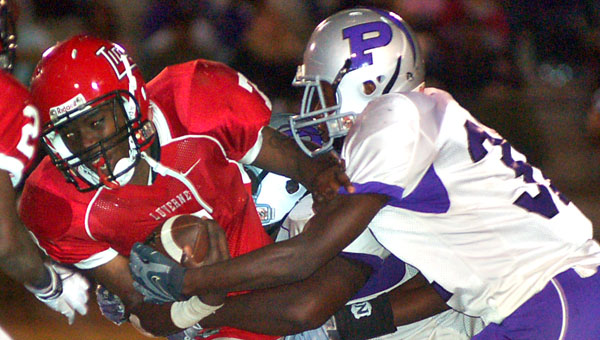 Two of the biggest plays of the game came on fourth down with 2:09 left in the fourth quarter.

Leading 21-20, the Tigers were driving and needed six yards to earn a first down and keep the clock running.

An anxious Pike County defense jumped offside and shortened it to fourth and one.

“They had been blitzing and bringing a lot of people on every play, so we thought we could get them offside,” said Luverne head coach Les Sanders. “That was a huge play.”

Pike County pulled out all the stops on the next play as the defense let Townsend run untouched for 25 yards to the endzone to make it a 28-20 lead.

The Bulldogs got the ball back with 1:36 to play, but an interception by Luverne sealed the game.

Pike County started the game strong with a touchdown run from Jarrell Bailey.

The Tigers then drove to the PCHS three-yard line, but fumbled.

The defense held the Bulldogs, and Ladorian Jackson returned the punt to the three-yard line.

Townsend punched it in a play later.

Luverne added a touchdown late in the second quarter on a 35-yard pass to Chris McGhee to tie the game at 14, but the Bulldogs were able to put together a drive in the last minute and a half with several well-thrown passes.

Bailey found Quadry Gresham on a short pass on the final play of the first half to put Pike County ahead 20-14.

“The biggest thing in the first half was that we couldn’t get off the field on third and fourth down,” Sanders said. “They were long downs, too.  One missed assignment would hurt us.”

However, the Luverne defense was able to hold the Bulldogs in check in the second half.

The Tigers also converted no fewer than three fourth downs on a third-quarter drive that ended in a six-yard run by Townsend to put Luverne up 21-20.

With the win, the Tigers clinched a playoff berth, although the seeding is still uncertain.

“We’re in the playoffs, and that’s the big thing,” Sanders said. “I’m really proud of how we played.”