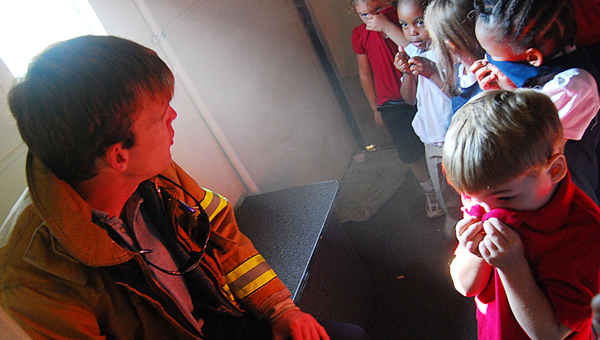 Jason Pouncey explains what to do when your house catches on fire. To the right, Cade McNaughton covers his nose to keep out the smoke that was filling the room.

Children at W.O. Parmer got to practice escaping from a smoke filled house on Thursday as part of Fire Safety Month.

The “house” was a covered trailer that had been outfitted with theatrical smoke machines that mimicked smoke buildup during a fire.

Chief Mike Phillips of the Greenville Fire Department says all this month the GFD has been traveling from school to school to discuss fire safety with children.

“The theme for this year’s Fire Safety Month is fire alarms, so a lot of what we have been focusing on is how important it is to have them in your home with working batteries,” Phillips said.

Once a class filed into the trailer, a firefighter would lead a short discussion of what was about to happen. Then, once the smoke detector sounded its alarm, the children duck-walked out in a single-file line, staying low to avoid breathing the smoke that rose to the ceiling.

Phillips said that having a plan is crucial to keeping your family safe.

“Everyone needs a fire escape plan so the entire family knows what to do if it happens,” Phillips said.

Before the demonstration ended, each child received a coloring sheet with smoke detector tips and fire safety advice that they could take him. While Phillips said it was primarily for the children, the sheet also served another purpose.

“It will help remind their parents to check all the batteries and make sure they still work,” Phillips said. “Every time the time changes, change the battery in your smoke detector.”